The first leg of our Lake Toba & Berastagi journey started with a bus ride from Medan to Parapat. Parapat is a town from which travellers catch a ferry to go to Samosir island. The bus arrived at our hotel in Medan on time, at 8.30 am. Soon, we made our way to Parapat via Siantar. The duration from Medan to Parapat for a non-stop trip is approximately 4 hours. However, most people, including us, would stop at Siantar for souvenir shopping and lunch, thus extending the journey by 1-2 hours.

Our first stop in Siantar was Paten, it was a shop selling homemade local snacks. We got to try the samples before buying. Most of the snack cost IDR 25,000 per pack. Paten is a competitor of Asli A1, both sell similar homemade snacks. Some of the snacks are suitable for vegetarians. My favourite food is Orong Orong (not in picture), followed by Pang Pang (in picture). 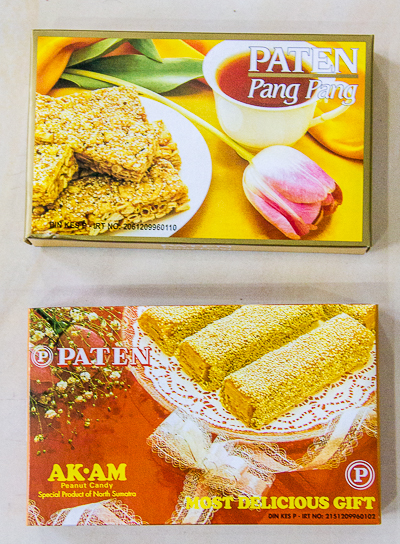 Some food I bought from Paten

Our lunch was at the legendary Kok Tong coffee shop. There are 3 or 4 Kok Tong shops in Siantar, we went to the one with “cafe” setting instead of the original store because I wanted my guests to feel more comfortable sitting in a cafe rather than a traditional coffee shop. Let me warn you, the coffee with milk is very sweet, and some dishes took a long time to be served that I ended up requesting them to pack the food. My father in law said that the coffee at original store tasted better than the coffee at this cafe. I myself couldn’t tell the difference as I was not a coffee aficionado.

Grandmother in law is not a fan of sea travel. The narrow walking board that connects stone landing platform and the boat made the whole thing a hundred times worse. The landing platform of the harbour was way higher than the boat floor, thus a connecting wooden board was installed at a steep decline for passengers to walk into the boat. The moment grandma saw it, she refused to go down, but all of us motivated her to be brave, and eventually she succeeded getting into the boat. But her fear has been planted, she trembled throughout the 1-hour ferry ride, kept asking whether we had arrived at the destination. We hugged and soothed her to calm her down but she couldn’t stop shaking throughout the boat journey.

We paid for ferry fees on board and we told them we’re going to Samosir Villa Resort. The ferry dropped other passengers at another drop-off before dropping us exactly at our hotel. This time, the landing platform and boat floor were at identical heights, so it was not that scary compared to the one at Tigaraja terminal. Having made the crossing from boat to landing plaftorm, Grandma took a rest at one of the stone benches and sipped a glass of warm water. A while later, grandma finally calmed down. 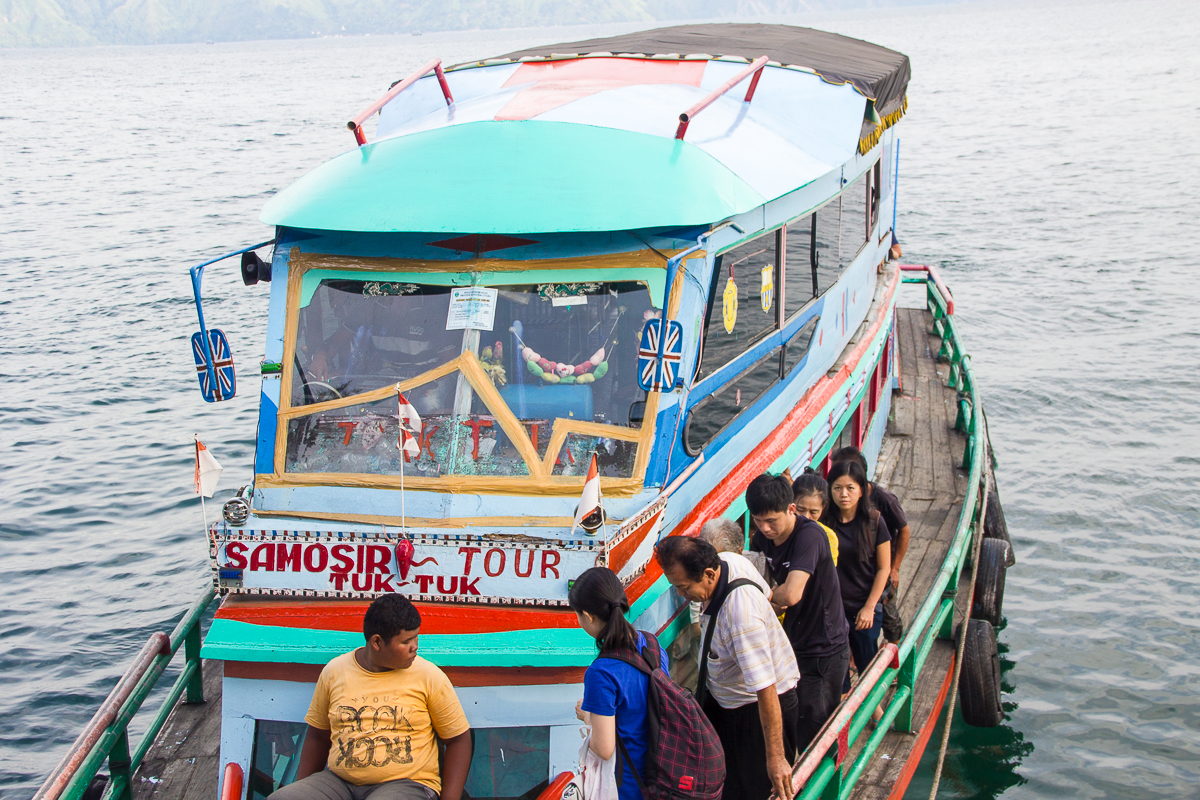 Us, alighting from the passenger ferry 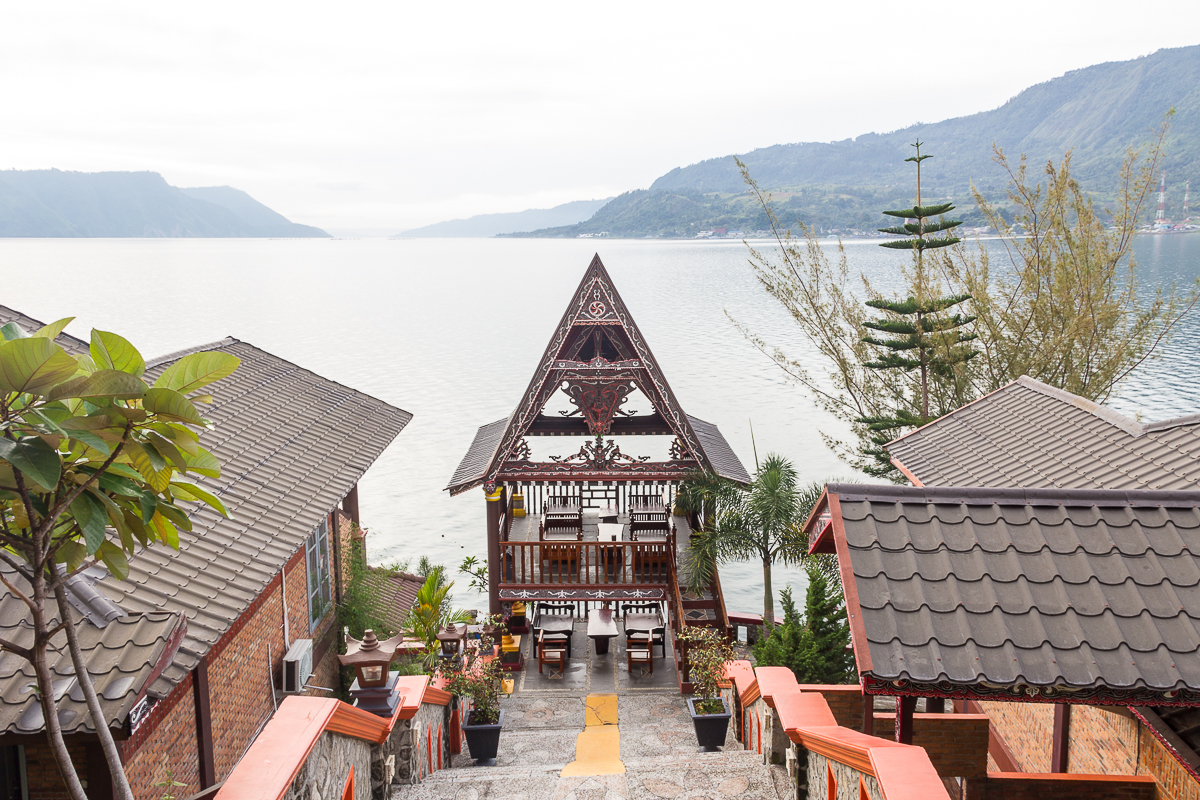 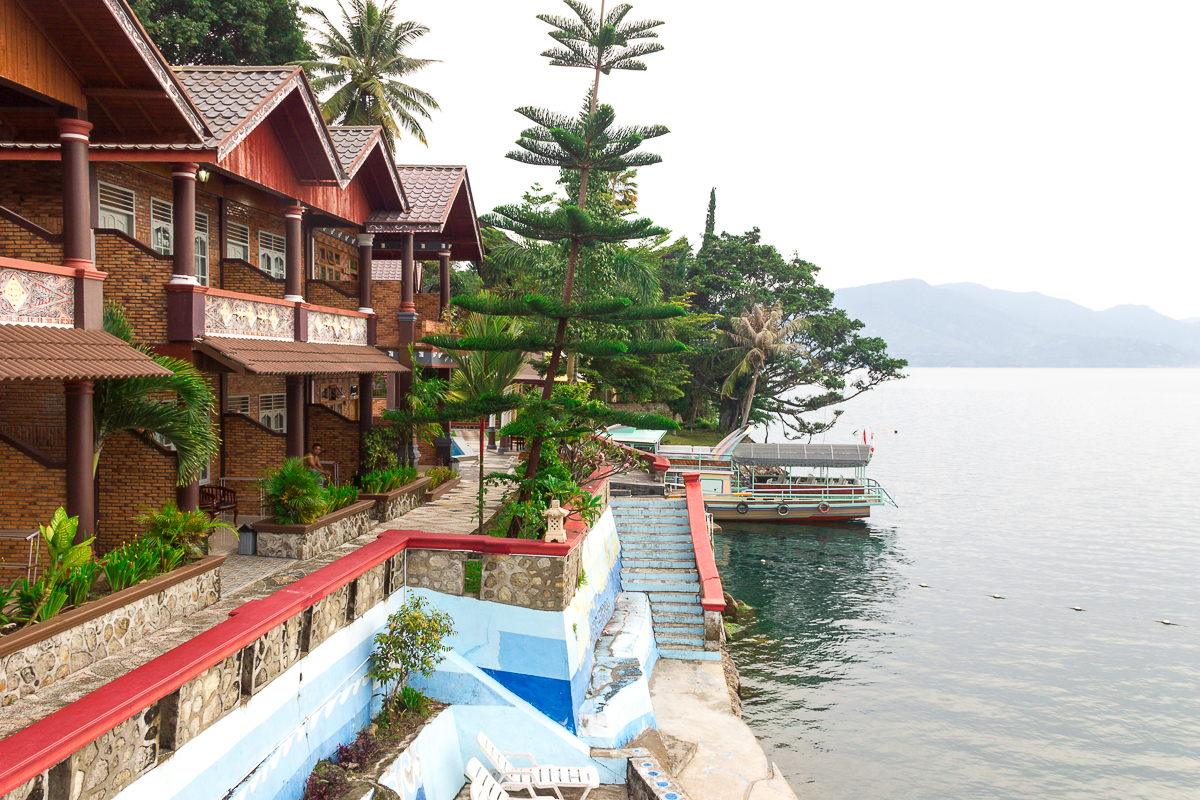 That night, we had dinner at a Chinese restaurant in Tuk Tuk, which is within walking distance from our hotel. We ordered 2 kg of boiled lobster (IDR 150k/kg), steamed sun hock fish (IDR 120k/pc), calamari, seaweed soup and plain rice. It cost us a total of IDR 685k. They claimed to be the only Chinese food restaurant on the island. The staff happened to be my aunt’s childhood friend! Overall it was a satisfying dinner. They said the lobster supply wasn’t consistent and advance order is recommended. They’re able to cook vegetarian menu as well.

I didn’t take many photos during this ferry ride as we were consoling grandma. Therefore, I’ll show you photos from my previous ferry trips crossing the lake. I hope you feel inspired to visit Lake Toba in the future if you haven’t yet! 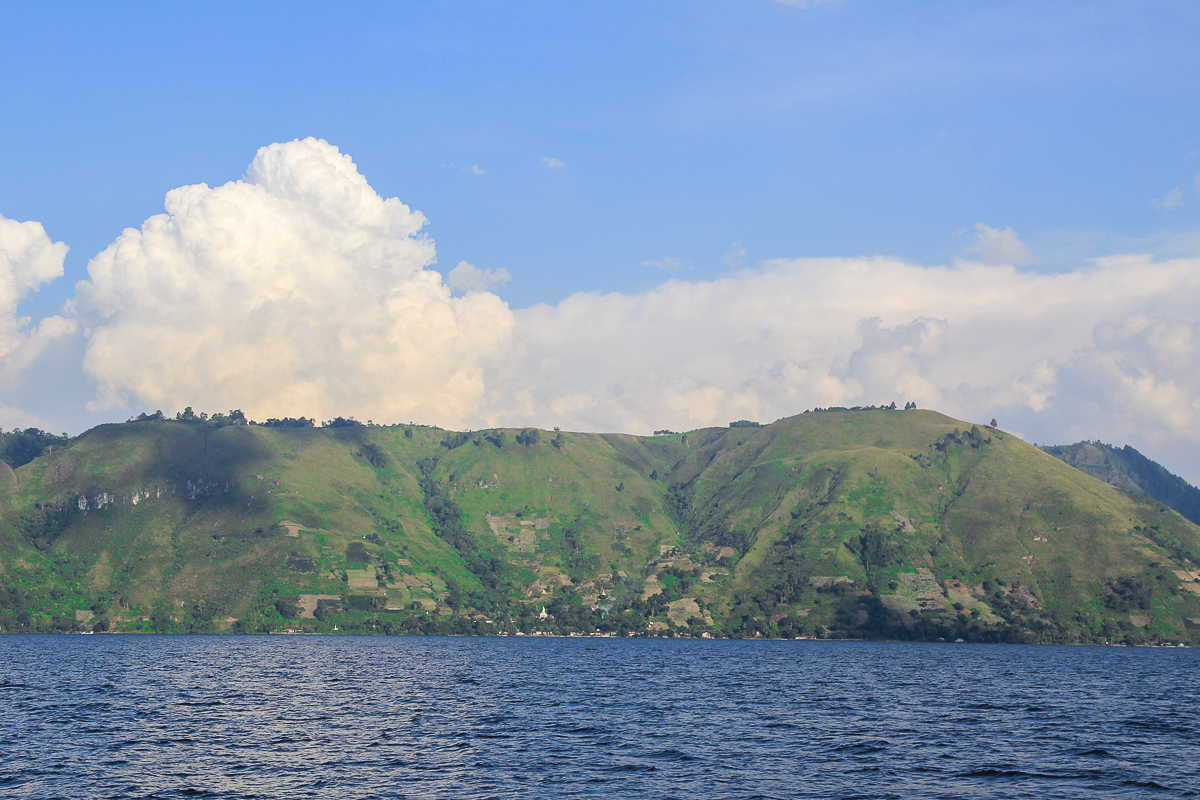 From 2011: Beautiful hills and lake during our afternoon ferry ride 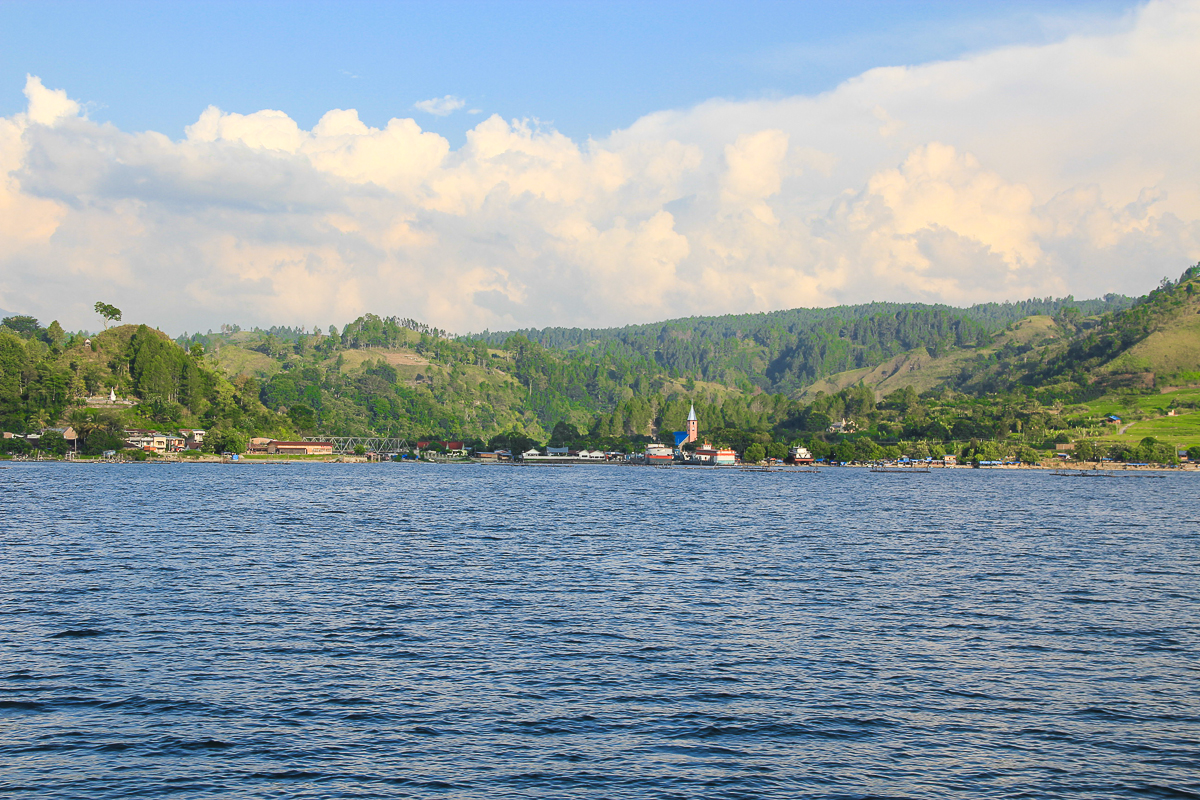 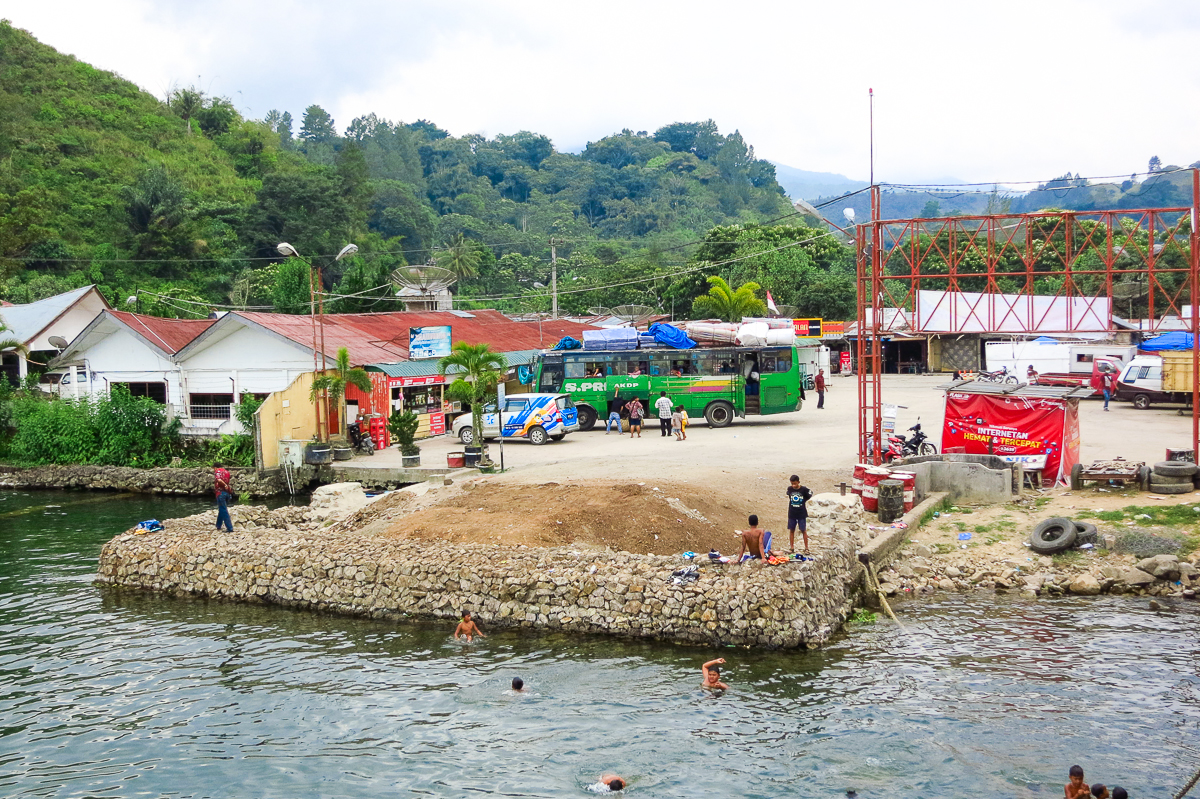 From 2016: Ajibata terminal for car ferry 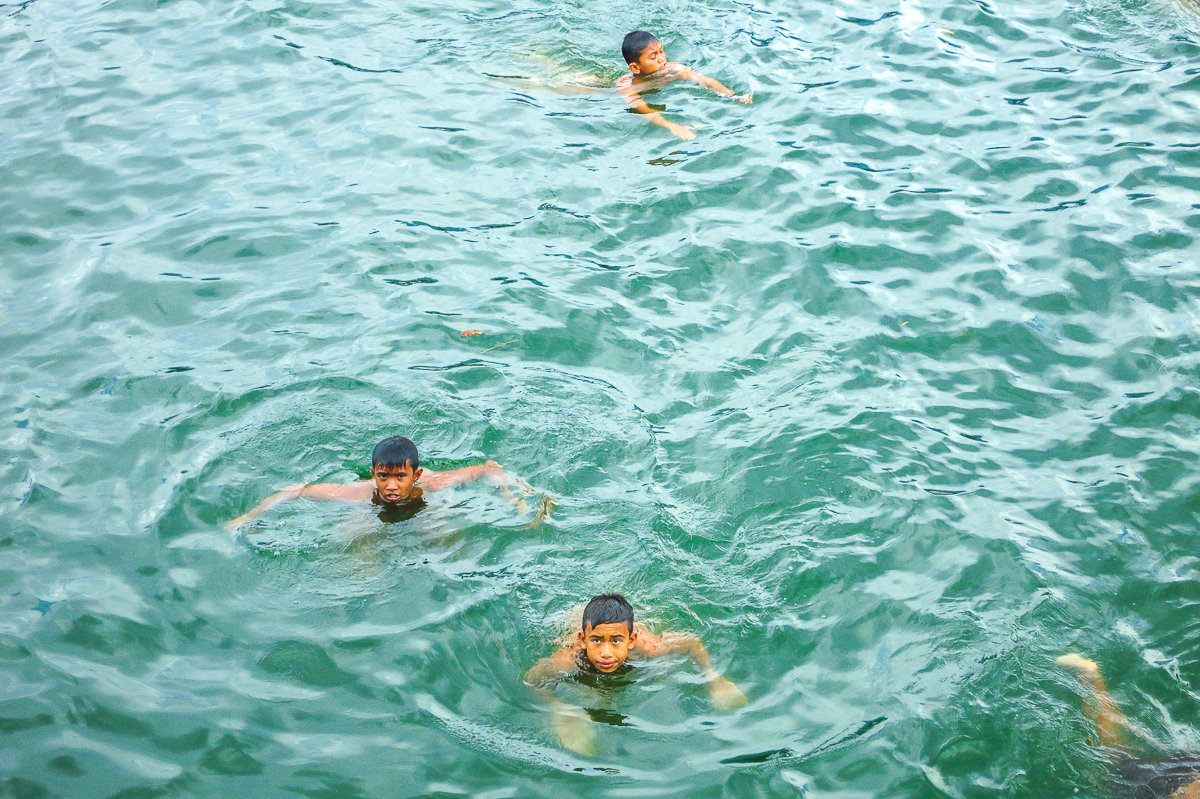 Also from 2016: Kids swimming in the lake, waiting for ferry passengers to throw money at them 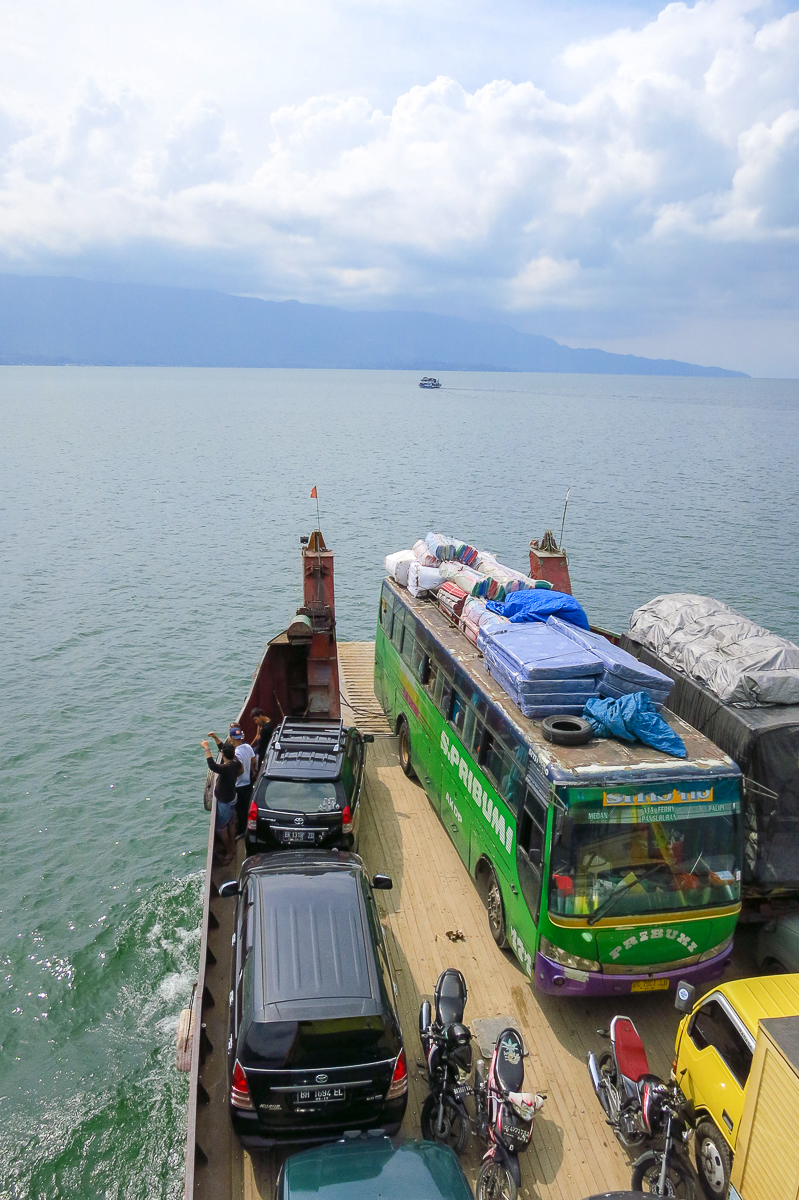 Also from 2016: View from upper deck of the car ferry

Other than Paten, Asli A1 and Kok Tong in Siantar, there is also a famous Buddhist temple called Vihara Avalokitesvara with a stunning statue of Kwan Im Goddess. I visited this in my previous trips with friends, and I highly recommend it if you pass by Siantar. 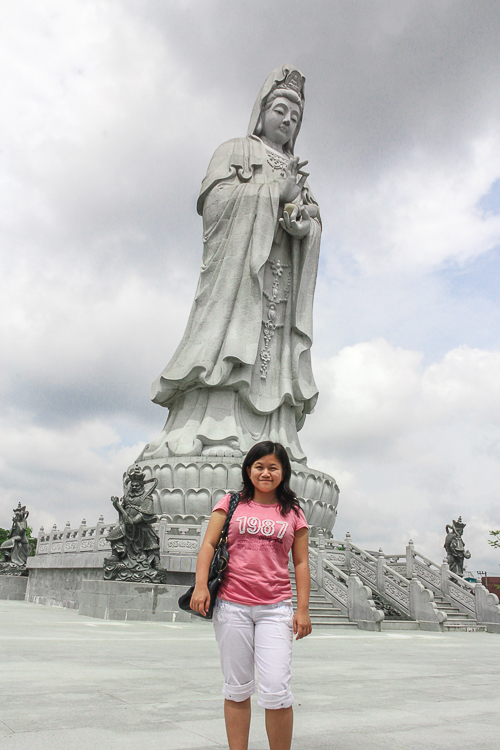 From 2011: statue of Kwan Im at Vihara Avalokitesvara, Siantar

As of Jan 2017, the cost for car ferry is IDR 200k/car from Ajibata terminal in Parapat to Tomok terminal in Samosir. Meanwhile, the cost for passenger ferry is IDR 15k/adult and IDR 10k/child from Tigaraja terminal in Parapat to Samosir island, we can request the ferry staff to drop us off at hotels or Tomok/Tuk Tuk. The majority of hotels and restaurants in Samosir are located in Tuk Tuk, while Tomok is the cultural village with souvenir shops.

Thank you very much for your very interesting blog full of essential information for traveling in Asia. I have a question, is it easy to find a private taxi without reservation from Medan airport to go to Parapat? we will arrive in Medan airport at the end of the morning and we want to go directly to Parapat. Do you have any idea of the time for this trip? thank you in advance for your answer and continue like that, it is a gold mine for travelers. William from France

Hi William, Thanks for your compliment! There are some taxi services at the airport, however I can help you arrange a local private driver with reasonable prices. Feel free to contact me if you are keen. Have a good trip to Medan!