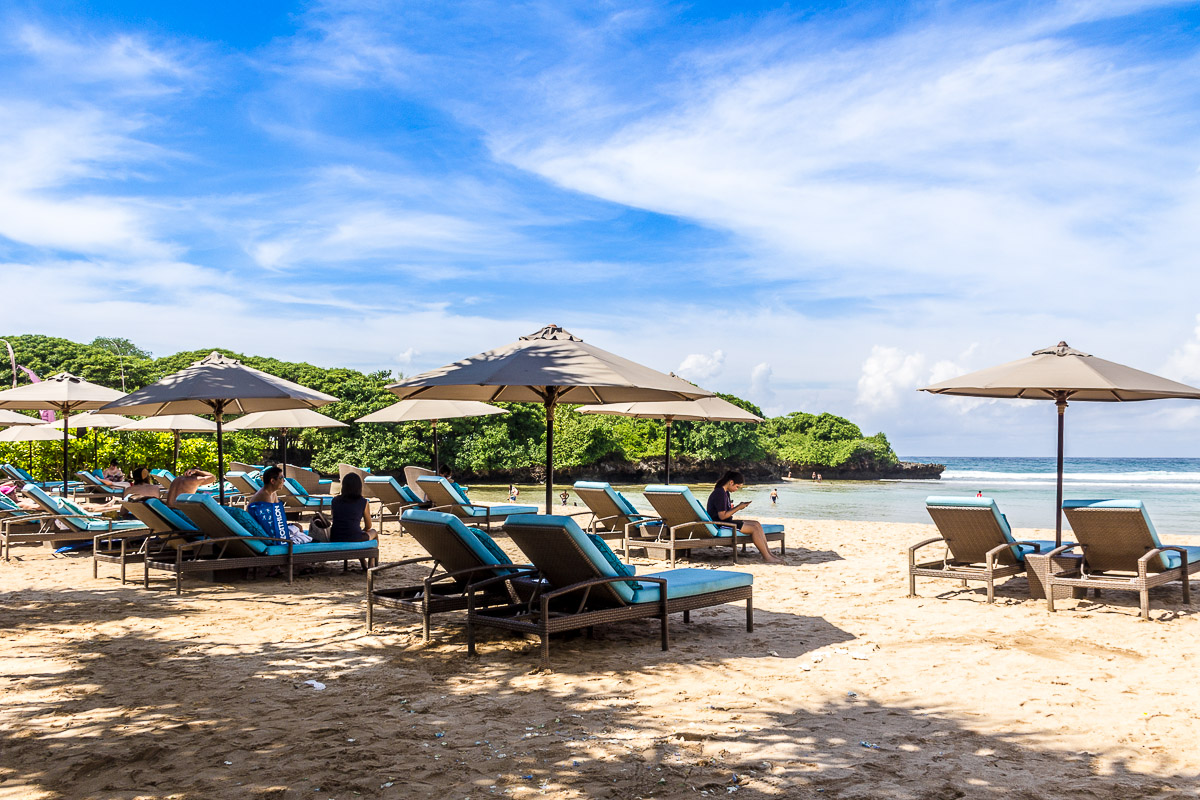 Even though Courtyard Marriott Nusa Dua Resort doesn’t have its own beach within its resort, it does have a private beach club at Nusa Dua Beach, near Peninsula island, at the easternmost end of Jalan Pantai Mengiat. In the morning of our second day in Bali, we took the complimentary shuttle service of Courtyard to the beach. There wasn’t a fix schedule of shuttle bus timing; whenever we needed the shuttle, we just informed the staff and they would arrange for us. The journey between resort and the beach was quite short, probably between 5 to 10 minutes. The beach wasn’t a private beach, everyone is allowed to go there, however the beach clubs only allow their guests to enjoy the club’s facilities.

When facing the Peninsula island, the beach on the left is not for swimming. There was a signboard written in Indonesian language that say, “Bahaya! Dilarang Turun!” which translates to “Danger! Descending is Prohibited!” My friend was questioning on why the caution signboard is not provided in English language, since most of the tourists are foreigners who don’t understand local language. I totally agree with her. Moreover, there were news about high tide in Bali which hit certain resorts, on the same day that we visited Bali. Fortunately for us, the ocean was friendly on the day of our visit to the beach. Even the sky was so kind to show off its majestic composition and color. 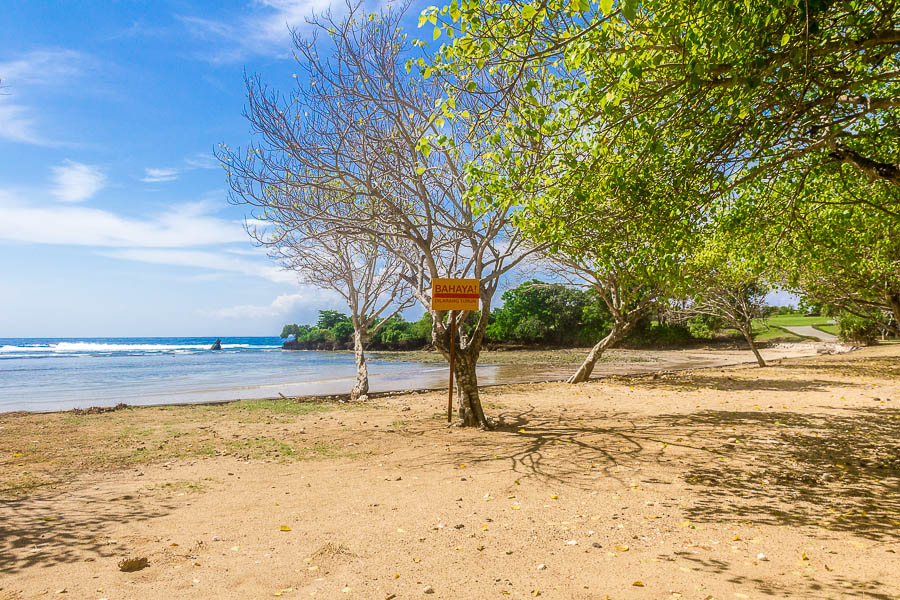 Warning sign that prohibits people from going down to the water 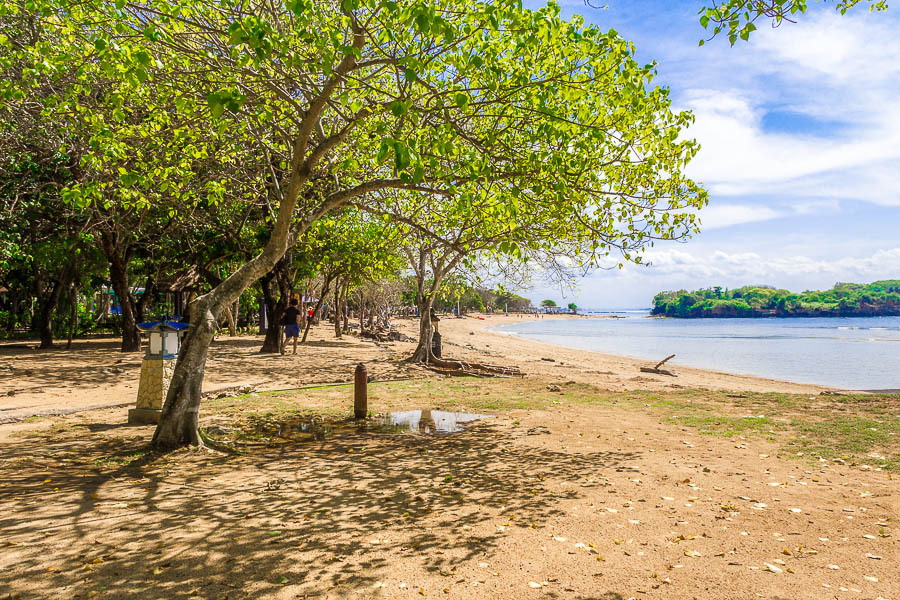 The beach which is not safe for swimming

What a beautiful day in Bali

The beach on the right side is where the beach club is located at. Other than Courtyard, I also noticed other resorts’ beach clubs, such as Mercure Bali. We walked pass a black board with information of tide schedules and recommendation of what can and can’t be done during low and high tide. At Courtyard Beach Club, after mentioning our room number to the staff, we were guided to the reclining seats on the beach, and given a towel each. Despite the scorching weather, all the seats are sheltered with umbrellas. There is a table with chilled infused lemon water and coconuts. A few locals came to us to offer their products, such as sarongs, snacks and souvenirs. Two of my friends went down to the water while another friend and I simply sit down contentedly on our seats, doing our own things. For her, it was listening to music. For me, it was reading a book on my kindle, followed by dozing off. 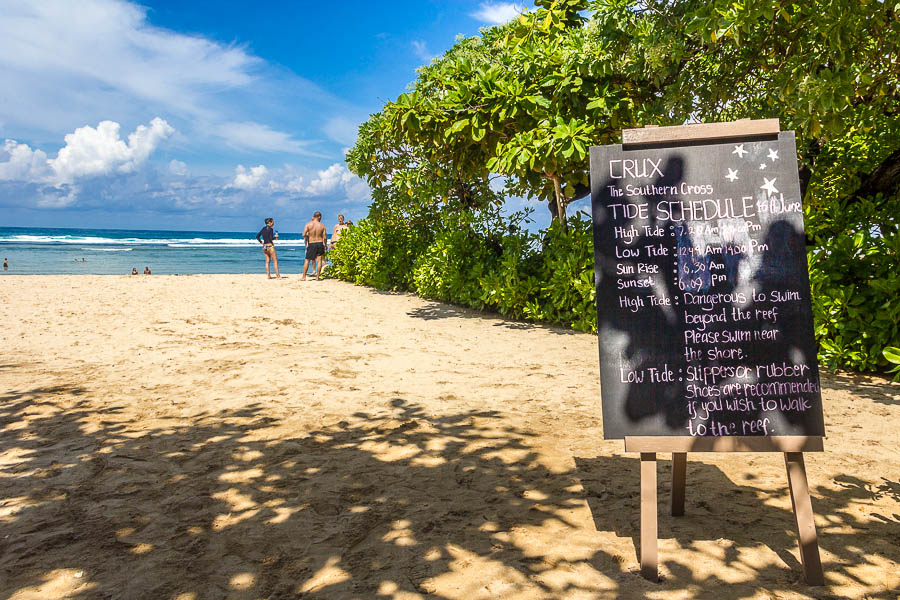 Tide schedules and things to do and not do 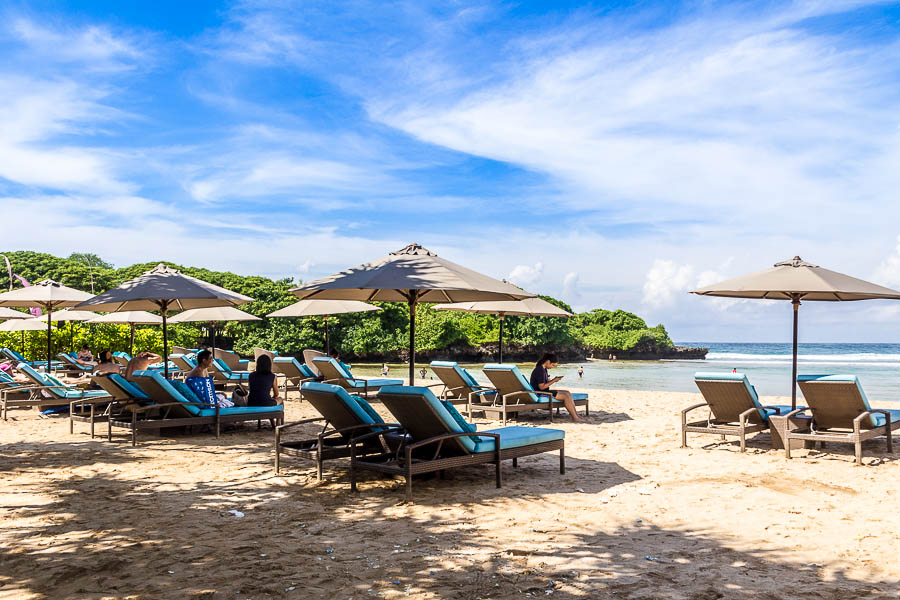 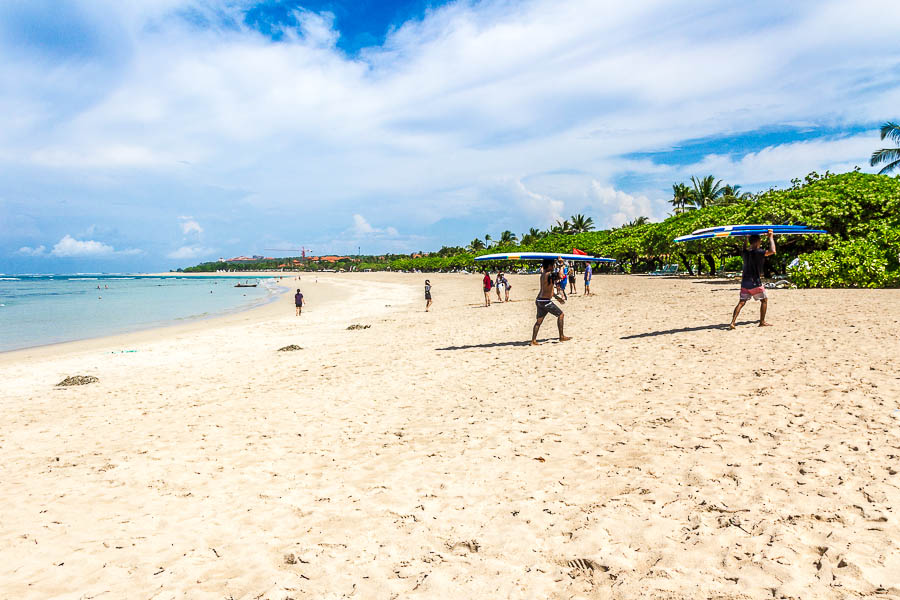 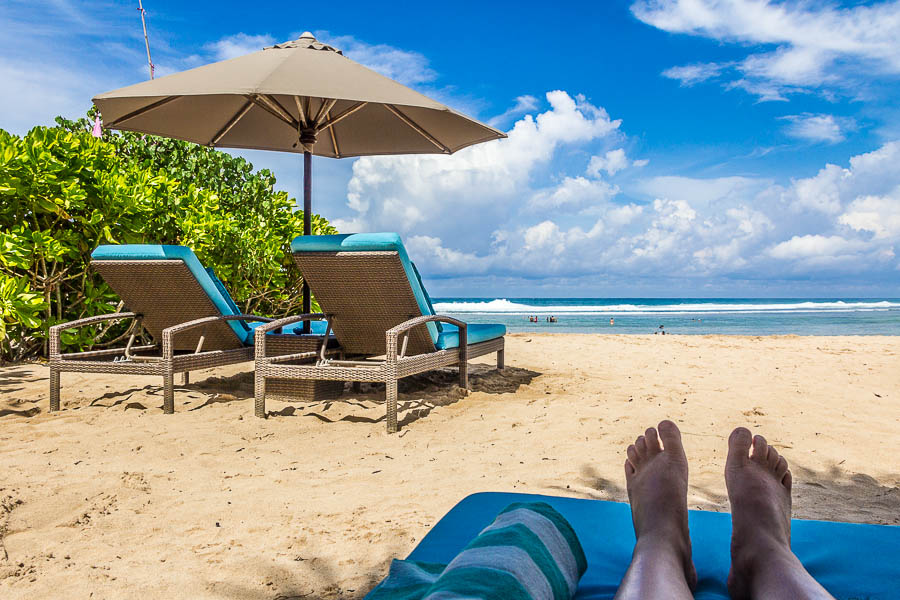 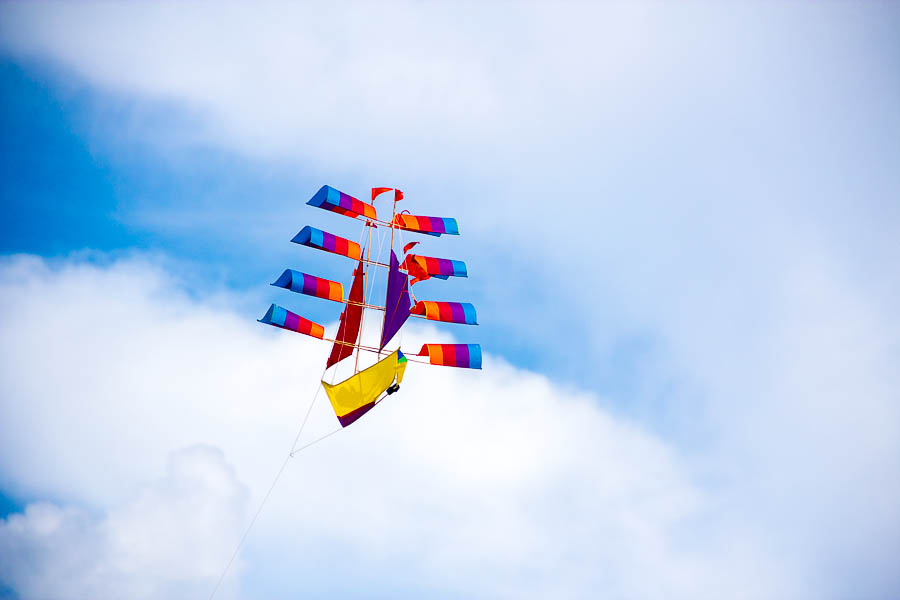 After what felt like an hour, I woke up and realized I haven’t explored anywhere yet. I successfully convinced my friend to walk under the blazing sun to the Peninsula Island (Pulau Peninsula). Peninsula Island is a short walk from Courtyard Beach Club. Our first encounter was a huge stone, inscribed with a list of World Trade Organisation countries which participated in Tree Planting Ceremony in Nusa Dua, on 3rd October 1993. At the middle of the island is the statue of Kresna and Arjuna, on top of a building that looked like an office. The height of the statue is 17 m, it was installed in 2012. This place is home for the annual Nusa Dua Fiesta, a festival to showcase Bali’s culture, art and music, which has started since 1999. At the back of the statue, it is the Water Blow. The rock formation at Water Blow has been formed through constant blows of the waves. Among the rocks, there is a small opening, so when the waves come and hit the rocks, it would look like a huge splash / blow. An old man stood at the end of the walking path and stopped people from going to the end of the path. He told us, “Mbak, sampai sini aja ya. Alarmnya ga bisa bunyi,” which translates to, “Miss, you can only walk until here. The alarm is not working.” There were also barricades to prohibit people to go through to the end. 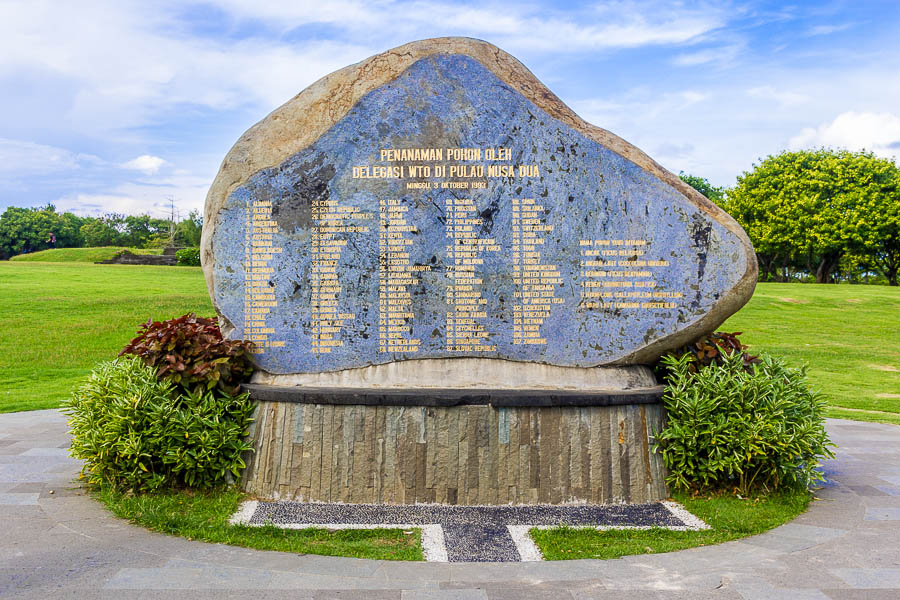 Statue of Kresna and Arjuna 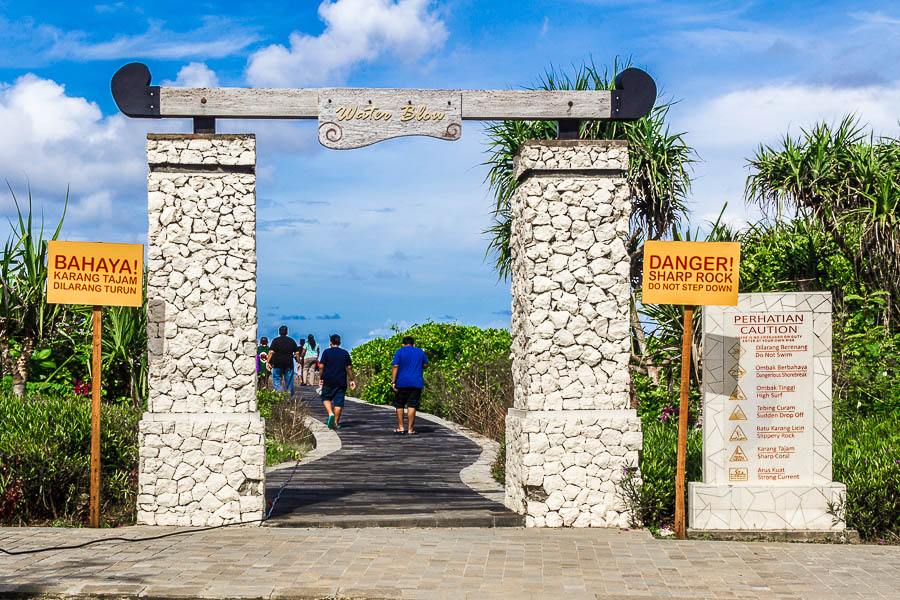 The entrance to Water Blow 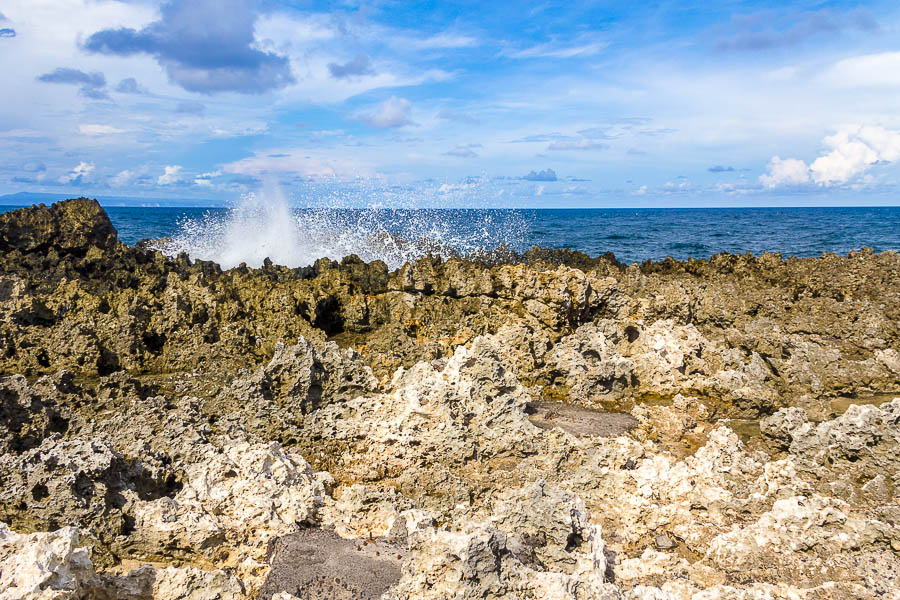 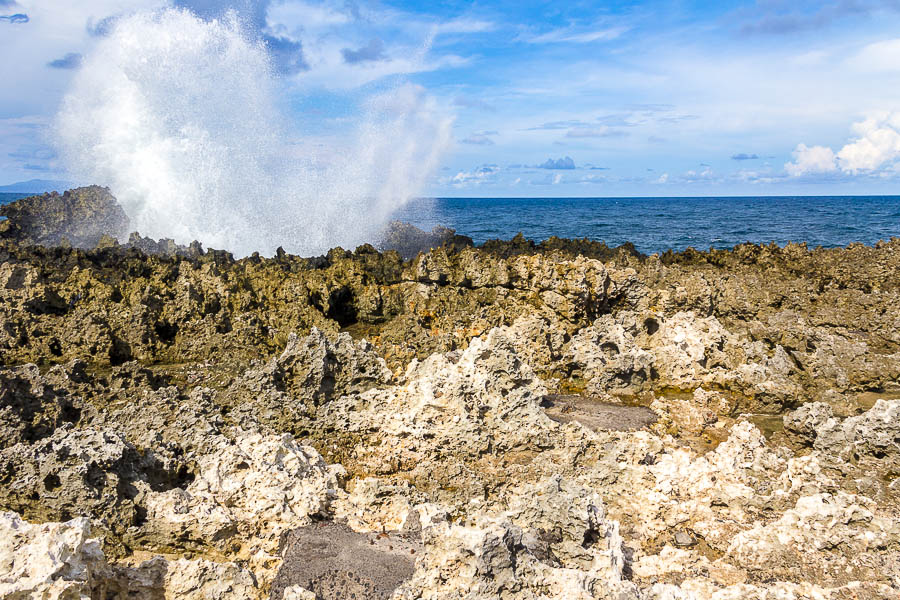 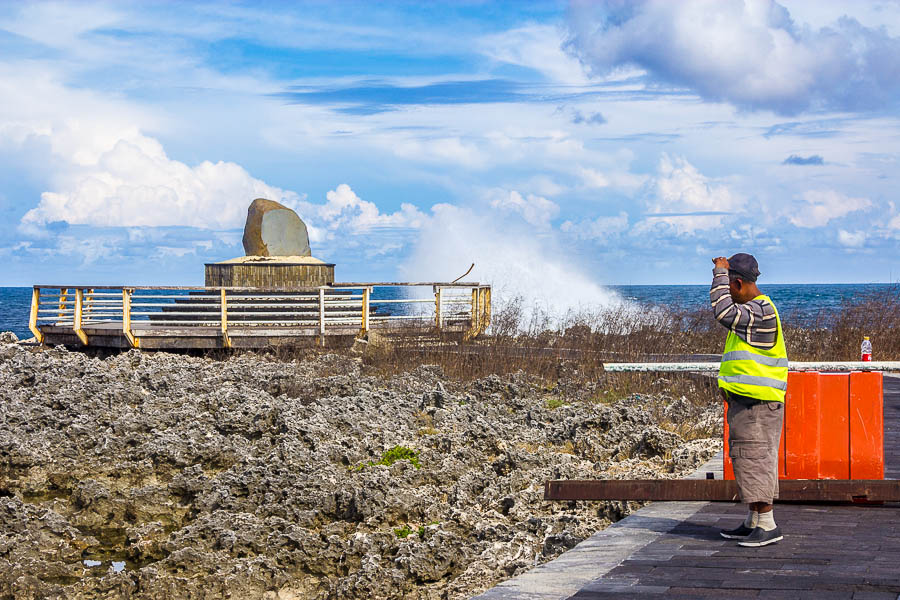 The old man who prevents people from walking to the end

Done with sightseeing, we ordered a coconut from the beach club for Rp 30 000. Not bad! There was a Happy Hour promotion of 1-for-1 mocktails,  from 2-6pm. There was a toilet and washing area at the beach club, but I didn’t notice shower area. In overall, I did enjoy the beach, the beach club, and their proximity to the hotel. It’s a great vacation place for families, couples or friends. 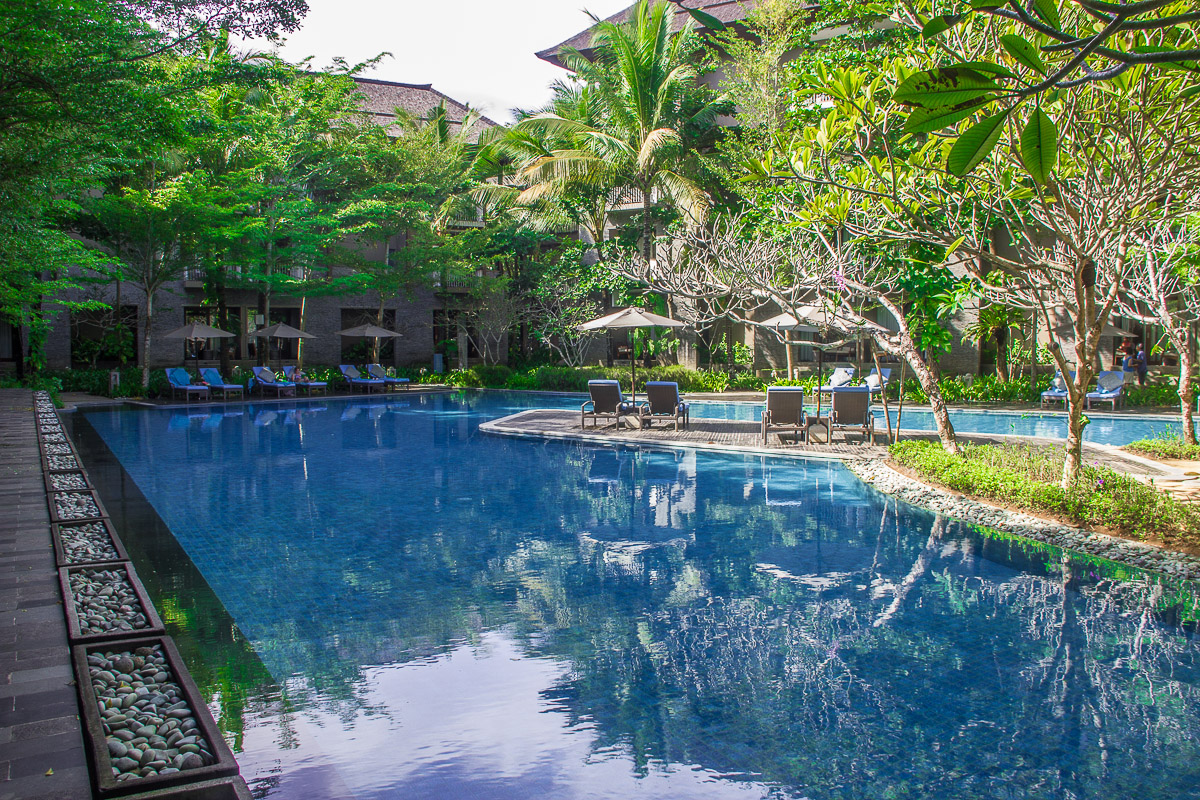 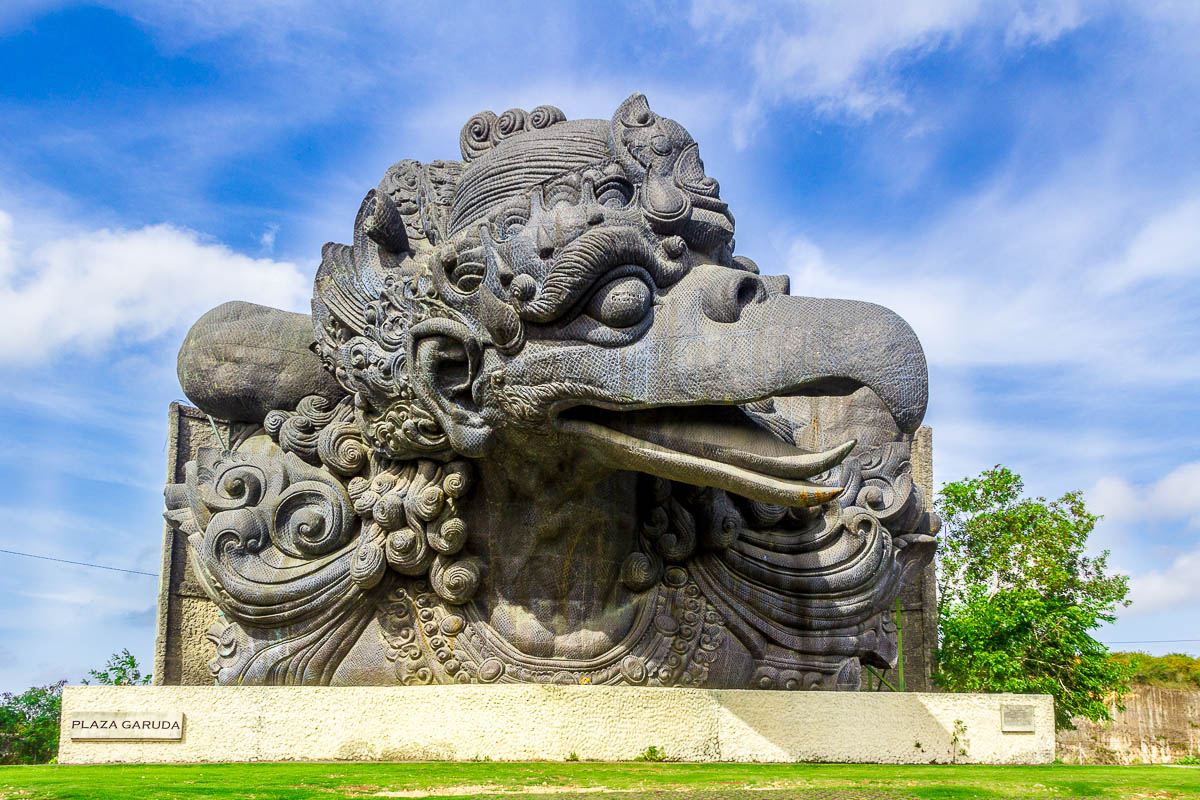