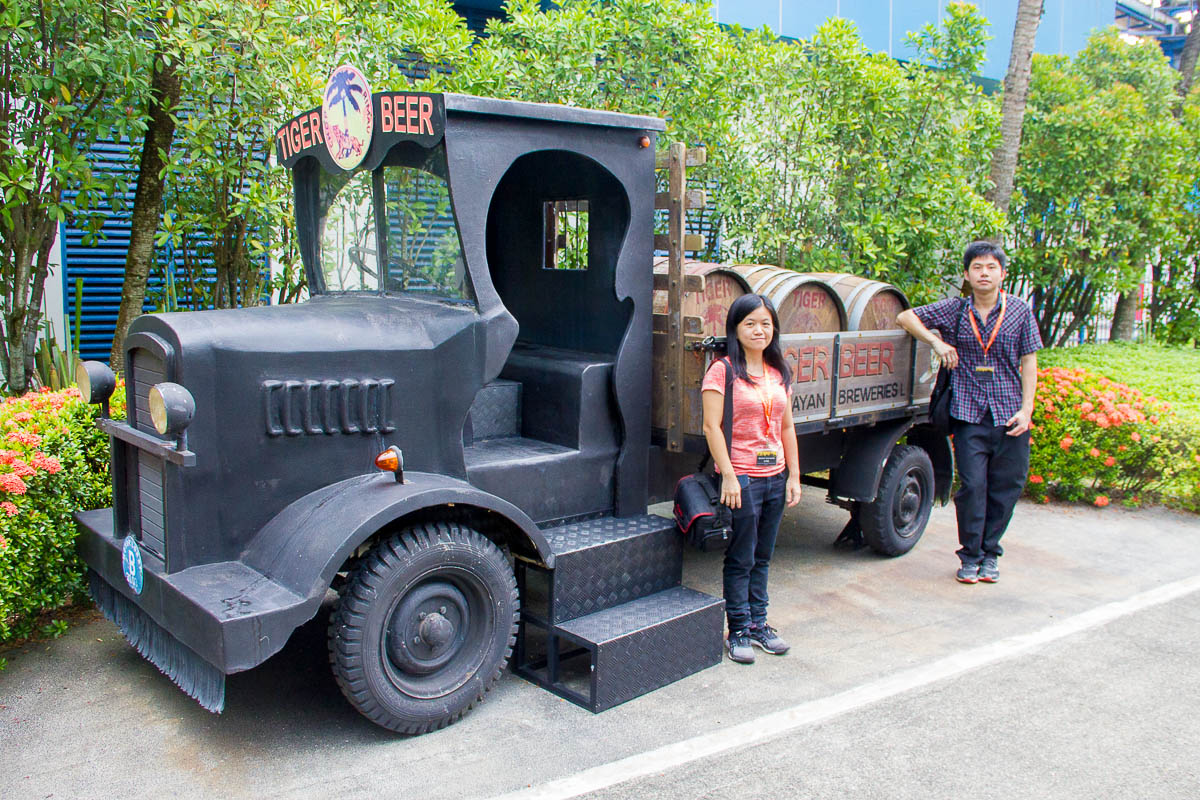 On one sunny Friday afternoon, my friend, my husband and I made our way to the far west of Singapore for the Tiger Brewery Tour. I was eager to join this tour because of curiosity. Meanwhile, both of them were really looking forward to the beer tasting session, obviously.

Would I recommend it? Yes, absolutely!

Getting to the Factory

The address of the brewery is: 459 Jalan Ahmad Ibrahim, Singapore 639934. If you are taking public transport, take the MRT and alight at Joo Koon. Afterwards, take the Exit A, walk into FairPrice Hub building and follow the signs to Bus Interchange.

At Joo Koon Bus Interchange, take bus 182 or 182M. Alight 6 stops later, at Asia-Pacific Brewery bus stop. Walk a couple hundreds of metre in the same direction of the traffic, and you’ll find the entrance on your left. The entrance is a small gate, so pay extra attention, otherwise, you might miss it.

If you drive, complimentary parking is available.

We booked the tour online on Tiger Brewery Tour’s website. You can also walk-in but you’ll end up paying $2 more compared to if you book it online.

Meanwhile, the admission fee for child is S$12 regardless of day and method of booking.

The guided tour is available from Monday to Saturday (excluding public holidays), at 1pm, 2pm, 3pm, 4pm and 5pm.

The guided tour consists of approximately 45 minutes introduction, followed by approx. 45 minutes beer appreciation session. At the registration desk, we were given a lanyard and a beer token to be exchanged with beer. Let’s get started!

The tour starts at the Visitor Centre, where an introduction video was played at the beginning of the tour. Then, our guide showed us various awards won by the brewery, bottle packaging, glass and can designs, as well as advertisements of the beer since the beginning until now.

Next up, it was Ingredients Kiosk, where we could see what goes into a Tiger Beer. There are four main ingredients: malt, hops, yeast and water. The display kiosk allowed us to touch and smell the ingredients.

Basically, the steps in Tiger Beer brewing involve: crushing the malt to separate its content from the husks, adding warm water to the crushed malt and heating them in stages to produce a mash, filtering the extract (wort) of the mash from the husk, adding hop extract to the wort for distinctive aroma and bitterness, boiling the wort, cooling the wort, and adding yeast for fermentation to produce young beer. The young beer is stored until it matures and develops the final taste and flavour. Finally, the mature beer is filtered to remove yeast cells and coagulated protein particles to achieve a sparkling, bright brew.

From the Brew House, we climbed down the staircase to the lawn for a couple of photos with the Tiger Beer truck and the giant stone bottle of Tiger Beer.

The fourth stop was the Packaging Gallery where we saw the packing of Tiger Beer bottles and cans. We also got to see more transformation of Tiger Beer packaging and advertisements from the early days.

Here, the guide showed us how to do the perfect serve. We didn’t get to do it ourselves though. The guide remarked that we should hold the glass at the bottom, not the body, to prevent the heat from our hands to affect the beer’s temperature.

The whole brewery is fully automated and operates 24 hours a day.

Lastly, we came to the exciting part, the beer appreciation session. We were given 45 minutes for beer tasting in the Tiger Tavern.

First, we were given a glass of Tiger Beer. Once we finished it, or decided we’re done (we are not required to finish any beer we were given), we had to return the glass. Then, we can request for beer samples.

There was no limit of how much beer we could have, there was only 1 rule: at any point of time, we can only hold 1 glass. That was a great deal. We had Archipelago’s Irish Ale, Bohemian Lager, Singapore Blonde Ale, Belgian Wit and Limited Edition; Heineken and Tiger Silver. Other available beers were Guinness, Anchor, Baron’s and ABC.

We chatted with the bartenders and fellow tour attendees, played some darts and pools, checked out the souvenir shop (Tiger Den), and laughed like there’s no tomorrow.

But all good things must come to an end. We gave our token and had our last glass of beer before making our way to the bus stop.

Tips: Check Tiger Brewery Tour’s Facebook page regularly for any promotion. Who knows if they’re having discount! We went to their roadshows back in May and received brochures with a promo code for 50% discount. Life’s great!

How to Travel from Changi Airport to City

Getting Around Singapore – An Ultimate Guide