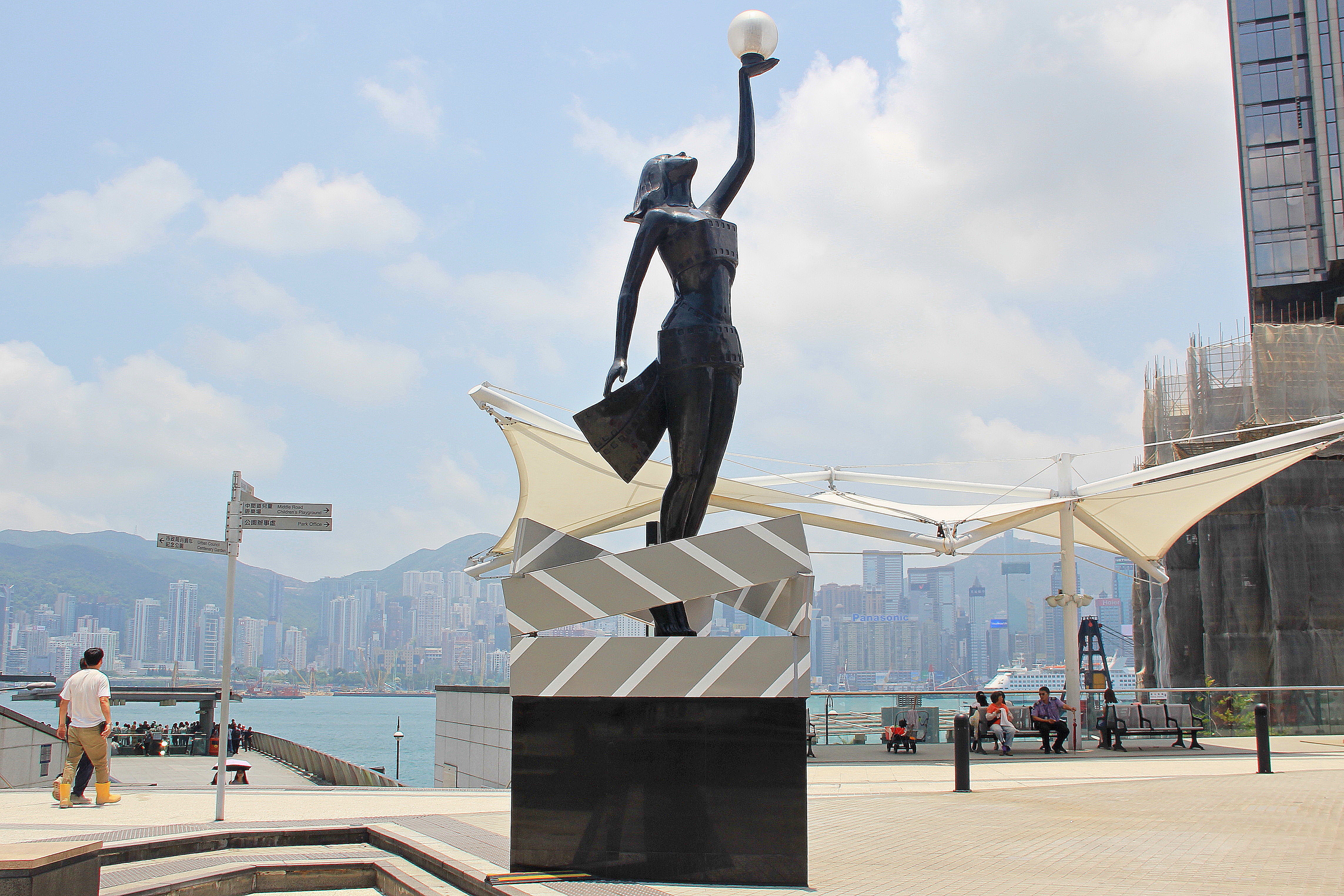 Hong Kong movies are no stranger in our family. During our childhood, my grandparents and parents love to watch HK movies on TV, VCDs, DVDs, cable, you name it. Jackie Chan, Bruce Lee, Andy Lau, Stephen Chow, Donnie Yen are some movie stars that we adore. My sister has seen photos from my mother’s previous trip to Hong Kong and was intrigued with Avenue of Stars. On our second day in HK, we went to the place that was supposed to be Avenue of Stars, but the place was closed for construction. We later found out from the internet that it is closed for renovation and targeted to be open in 2018. Fortunately, they were wise enough to display a small portion of the collections at Garden of Stars. So it became our mission to visit Garden of Stars. On the 5th day, we visited in the evening but couldn’t get satisfactory photos due to low lighting. Hence, on our last day, the 6th day, we were determined go back again to Garden of Stars.

This time, we finally got the chance to explore the whole Garden of Stars during the day and take many photos as memorabilia. I could tell you, my sister was overjoyed. Look at her expressions! So, Garden of Stars consists of a few sculptures of famous movie stars and HK Film Awards, hand imprints of numerous movie stars, poles with movie quotes, as well as cartoon illustration of movie stars. From the garden, it is possible to enjoy the scenery of Victoria Harbour and Hong Kong skylines.

For our lunch, we walked from Garden of Stars to Australia Dairy Co. We would not leave Hong Kong without a meal there. It was a very famous cha chaan teng in HK. The walking distance was approximately 1.4 km, which was good to prepare our stomach prior to a meal. The goddess of fortune was kind to us, the queue at Australia Dairy Co was not overwhelming, in fact it moved quite fast. We were seated in probably 10 or 15 mins. Once seated, we asked for English menu because the menu on the wall was in Chinese. The pace of the restaurant was so fast, the staffs were literally running around. Some of them kept on checking on us whether we were ready to place an order. We decided to order: macaroni with ham, spaghetti with pork, iced milk tea, cold fresh milk, and cold milk pudding. The macaroni didn’t suit our tongue, the spaghetti with pork was acceptable by our tongue, milk tea and milk was reasonable. And milk pudding was PHENOMENAL, so much so that I have to use all capital letters to describe how fantastic it was. Really, you have to try it!

After a huge lunch, we burned calories by walking towards Mongkok. On one of the pedestrian crossing overhead bridge, we saw very huge crowd of mostly women, sitting on canvas sheet on the floor of the bridge. They were sleeping, playing with phones, chatting with friends, eating, and even selling homemade food. And they speak Indonesian. As a fellow citizen of Indonesia, I felt a little bit of sadness. I guess they were domestic helpers spending their off-day, as it was a Sunday. It reminds me of a popular saying in my culture, that we all must work hard for our future. Do not complain how hard your job is, be grateful that you have a job. The women surely have made huge sacrifices to leave their family behind and to earn money working abroad. I hope that all the sacrifices are worth it.

From Mongkok, we went back to our hotel to collect our luggage and made our way to airport. We took MTR to Tung Chung, and then took bus S1 from Tung Chung to airport. At the airport, we returned our Octopus card at the MTR station, and received the refund. I was excited to see Disneyland shop at the airport, I couldn’t resist myself from buying key chains. I love everything about Disney. Lastly, we had our dinner at the food court. They were pretty affordable and fast. Done with dinner, we went in to the gate and said goodbye to Hong Kong. HK, you’ve been a great host this time around, see you again!