We woke up at 3am in the morning, and rushed out from the hotel at 4am. Tenzin was our cab driver. Our train from Delhi to Agra was scheduled to depart at 5.25am, but it was delayed by 15 mins. Delay is quite common in India, and 15 mins is considered a short delay.

We arrived at Agra at 9am. Outside the train station, there were many rickshaws. We walked to the prepaid taxi booth, and paid Rs 650 for a full day, non AC, taxi with a driver and a guide.

After having breakfast at Hotel Maya, we went for our first destination: Agra Fort. We bought a combined ticket of Agra Fort and Taj Mahal for Rs 1000.

Agra Fort is a Unesco World Heritage Site. It was built in red sandstone, on the bank of Yamuna River. White marbles were further added later on. Agra Fort is not far from  Taj Mahal, it is even possible to see Taj Mahal from Agra Fort. 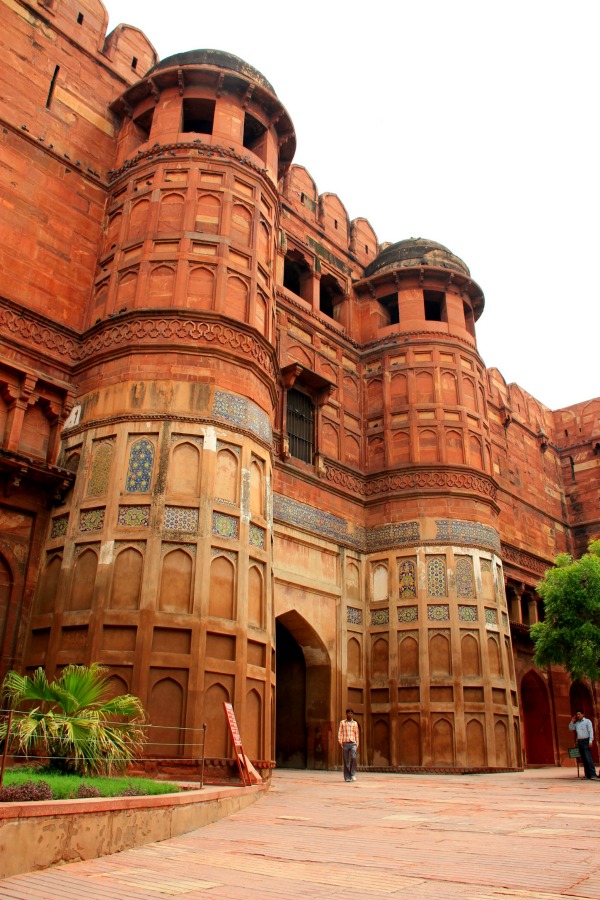 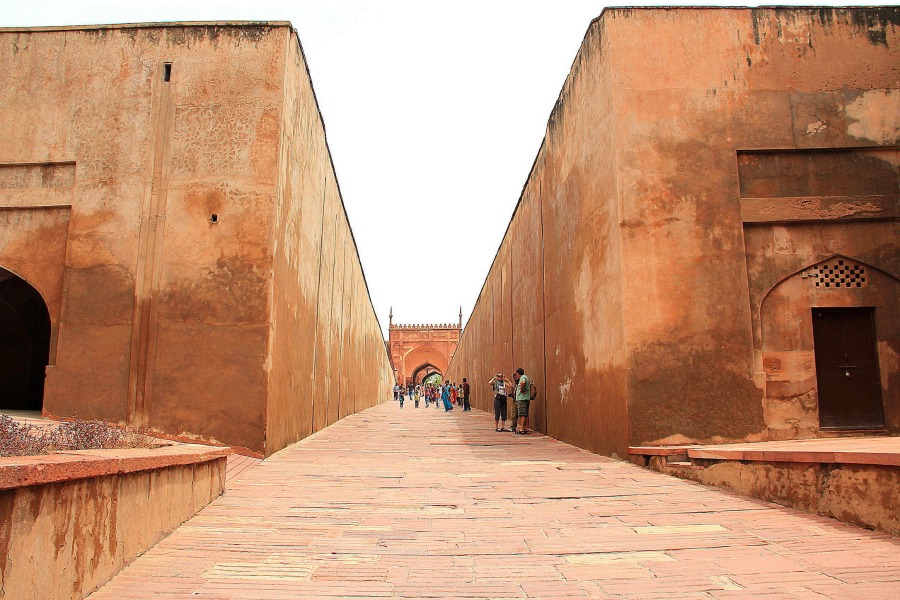 Inside of Agra Fort 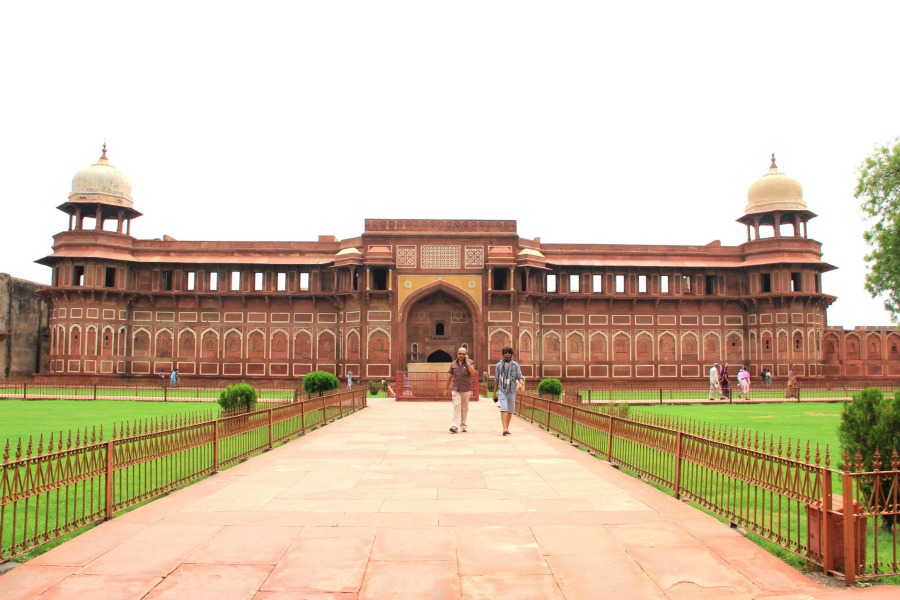 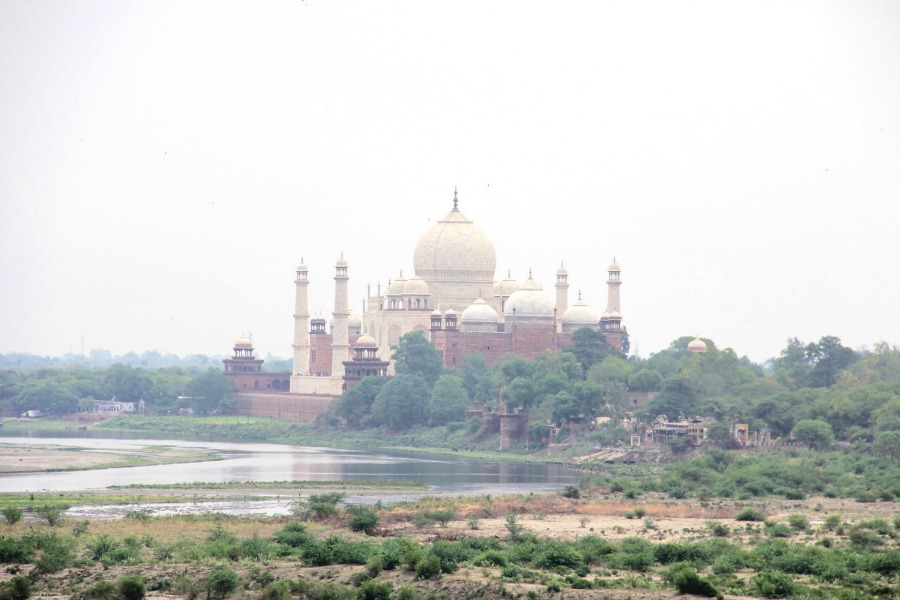 It is possible to see Taj Mahal from Agra Fort 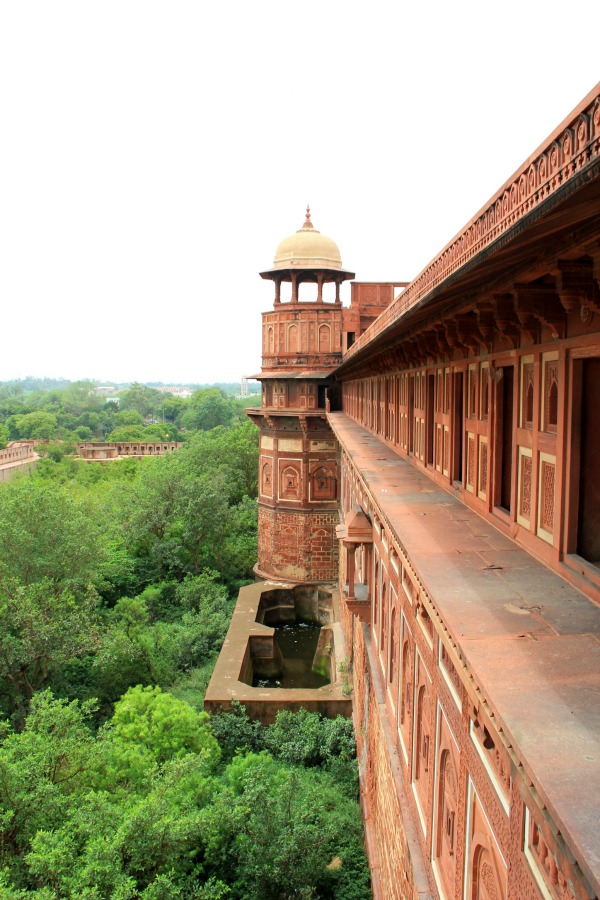 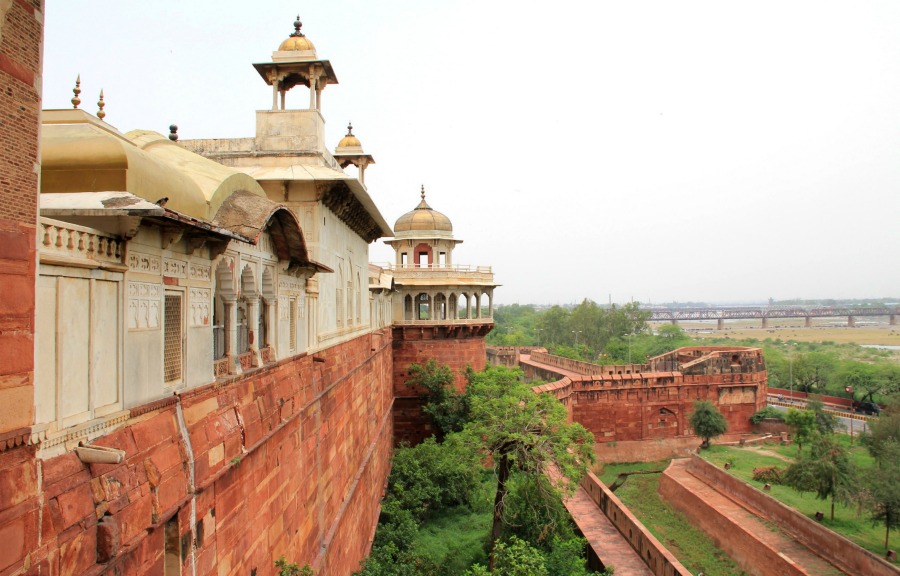 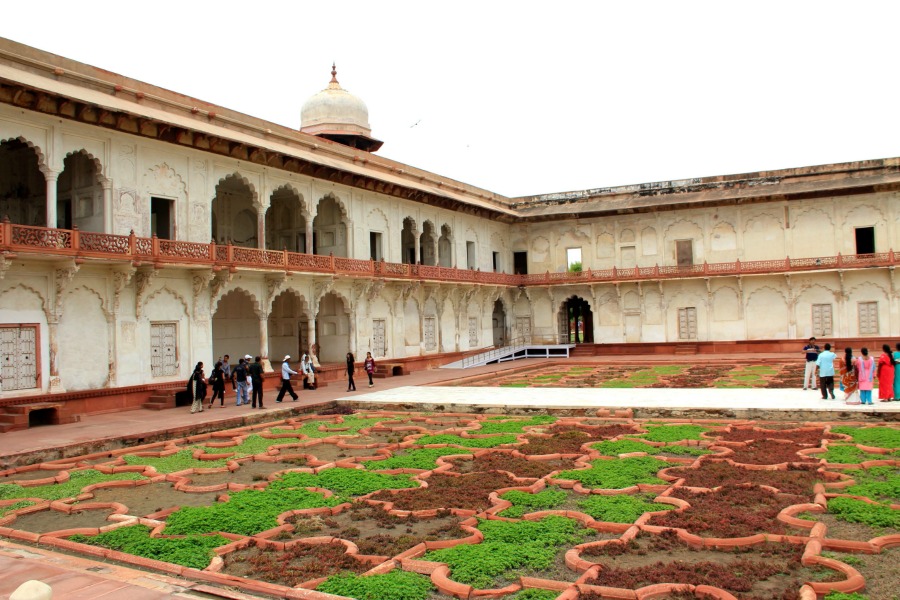 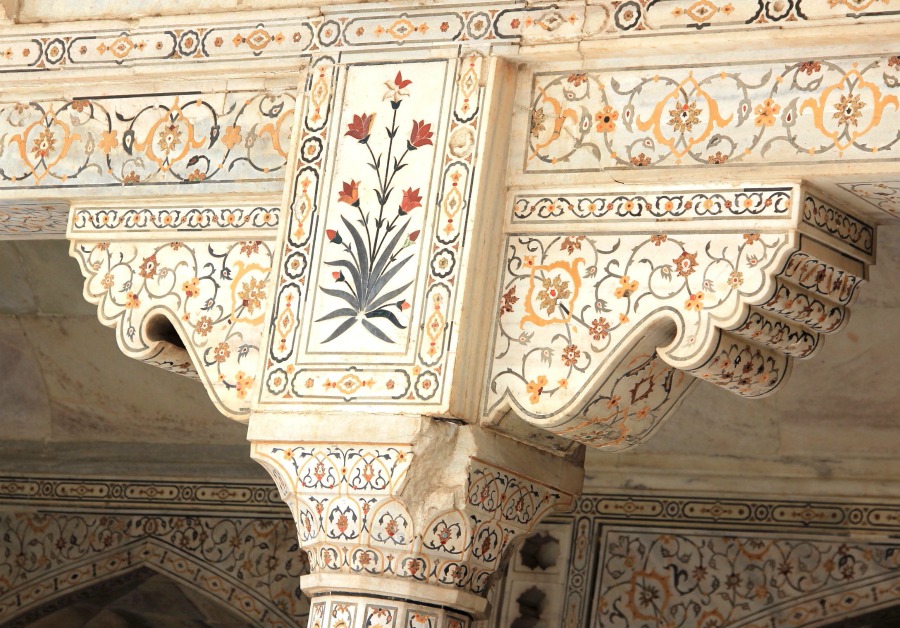 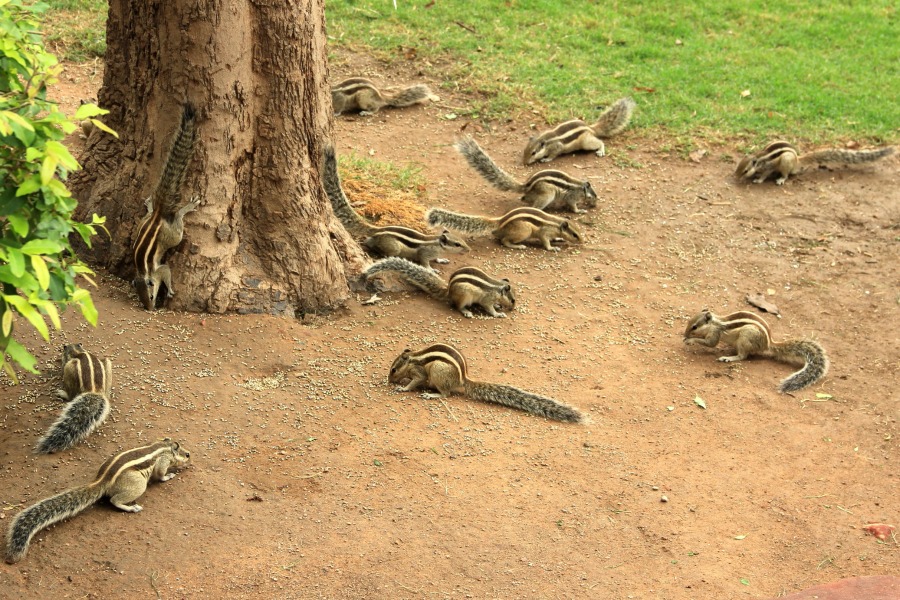 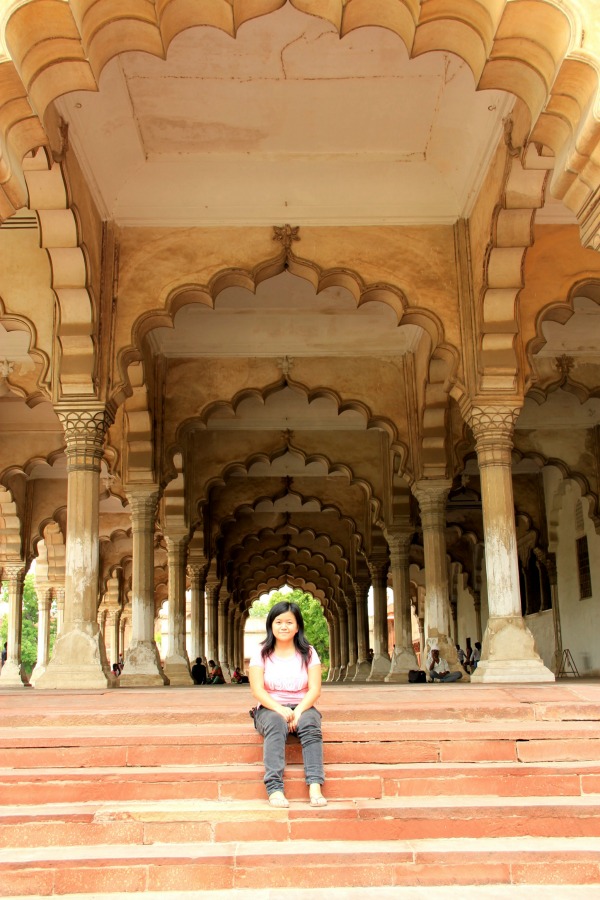 Diwan I Am (Hall of Public Audience) 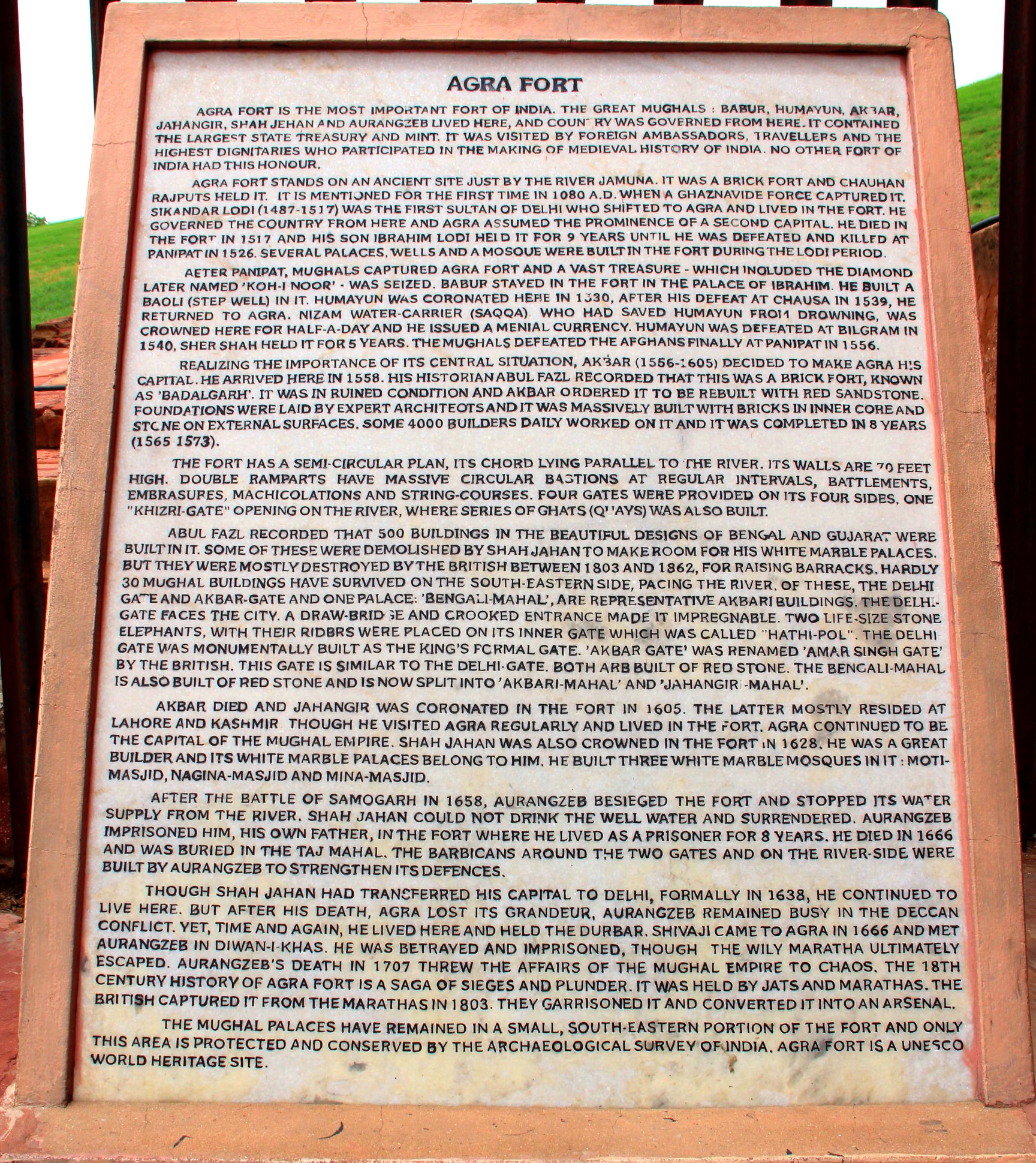 Our next stop was marble shop. Here, the shopkeepers showed us the step by step of how to decorate marble with precious or semi-precious gemstones. We were kind of awed, we ended up buying a few stuffs, and the price was quite expensive for my standard of living in Singapore.

Later on, when we finished our visit to Taj Mahal, at a shop outside Taj Mahal, I found the same stuffs being sold at 40% cheaper than the price we had paid to the first marble shop. I was furious. Gosh, I felt cheated. Our guide must have earned huge commission from the first shop.

My advise to you, avoid buying anything from the shop that your taxi/rickshaw bring you to, especially if your gut tells you that the price is rocket-high. If the price is reasonable, I feel that you should go for it.

Done with marble shop, we requested our guide to bring us to Pizza Hut for lunch. The guide tried to talk us out of it. He said that Pizza Hut in India doesn’t taste as good as the real Pizza Hut because the chefs are not that skillful compared with in other countries. We decided to go for it anyway. And guess what, we loved the food in Pizza Hut! Always trust your own gut!

After lunch, our guide and driver brought us to carpet shop, jewelry shop and saree shop. We didn’t buy anything because we have spent quite some amount for the marble shop. In the car, the guide told us that we had to give him tips. I was furious and couldn’t find a good way to reply.

Elena, however, was quick to think and responded that we were not aware that we have to pay for guide, on top of taxi rental. He then shut up. Moreover, the guide didn’t bring us inside the attractions, he just waited for us in the car when we went into attractions.

Our next stop was our main destination, the great Taj Mahal. We were so excited!

We intentionally visit it in late afternoon, around 4.30pm, in order to see sunset. At the entrance of Taj Mahal, we were approached by a guide who offered us a tour inside Taj Mahal for only Rs 100.

He showed us his certificate and told us that the official guide fee was Rs 475 but he had no business for the day, so he offered us huge discount. We thought it was a pretty good deal, so we took it.

His name is Mohamed Imran. He explained so many things to us about Taj and he was always smiling from the start to the end. He was a great photographer too.

He said he is lucky to be born and live in Agra because Taj is one of the world’s wonders and he has the chance to go to Taj at least one a week, which is Friday for a prayer. I really like his outlook.

Unlike our taxi guide who told us that the people in Agra have not many job opportunities because the government has prohibited manufacturing in Agra to preserve the Taj, therefore he had to become a guide to make a living. Well, if I were the taxi guide, I would do whatever job I can find with my whole heart until I could save enough money to go to other cities to pursue what I love to do in life.

In the end, we paid our Taj Mahal guide Rs 100 plus Rs 15 tip. Taj Mahal is a majestically beautiful place. We were awestruck and felt so grateful to be there. 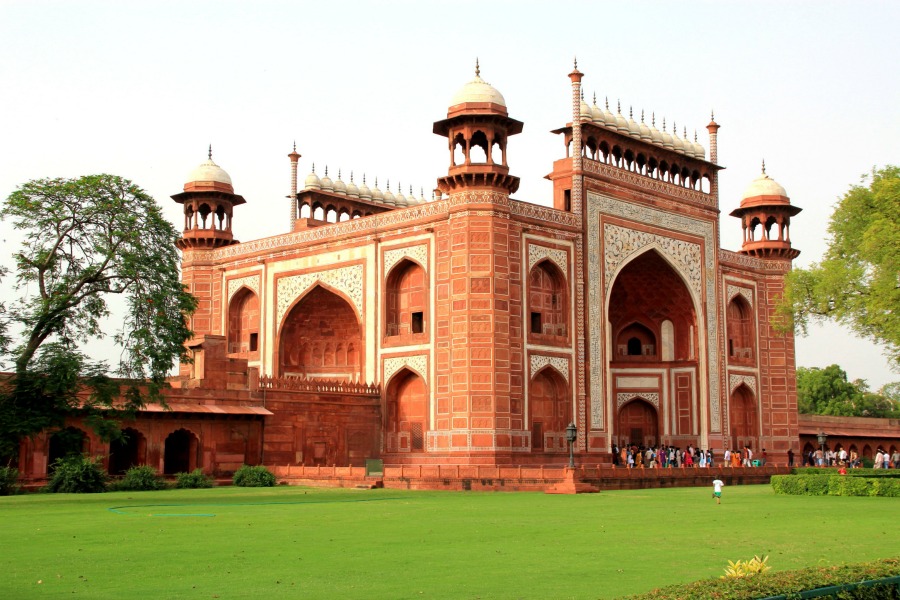 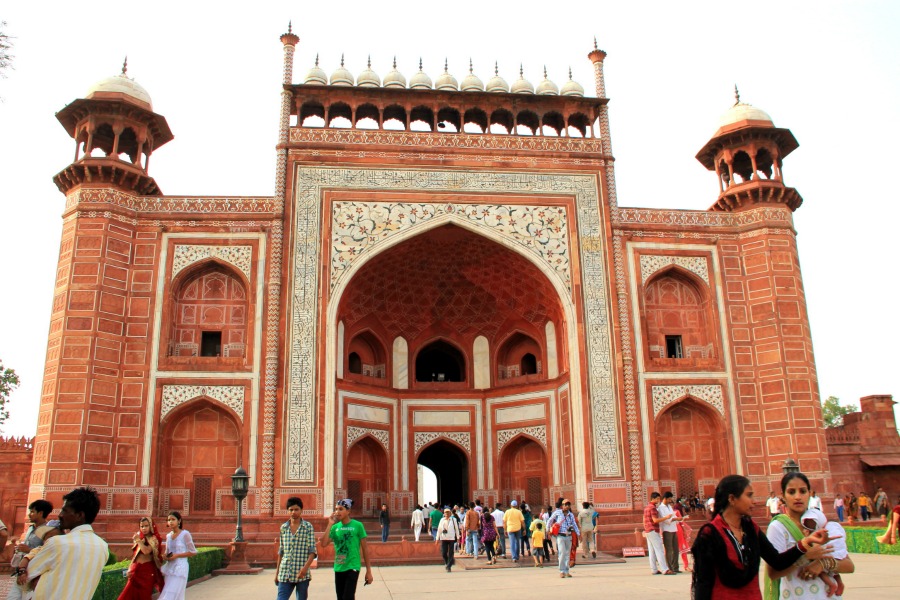 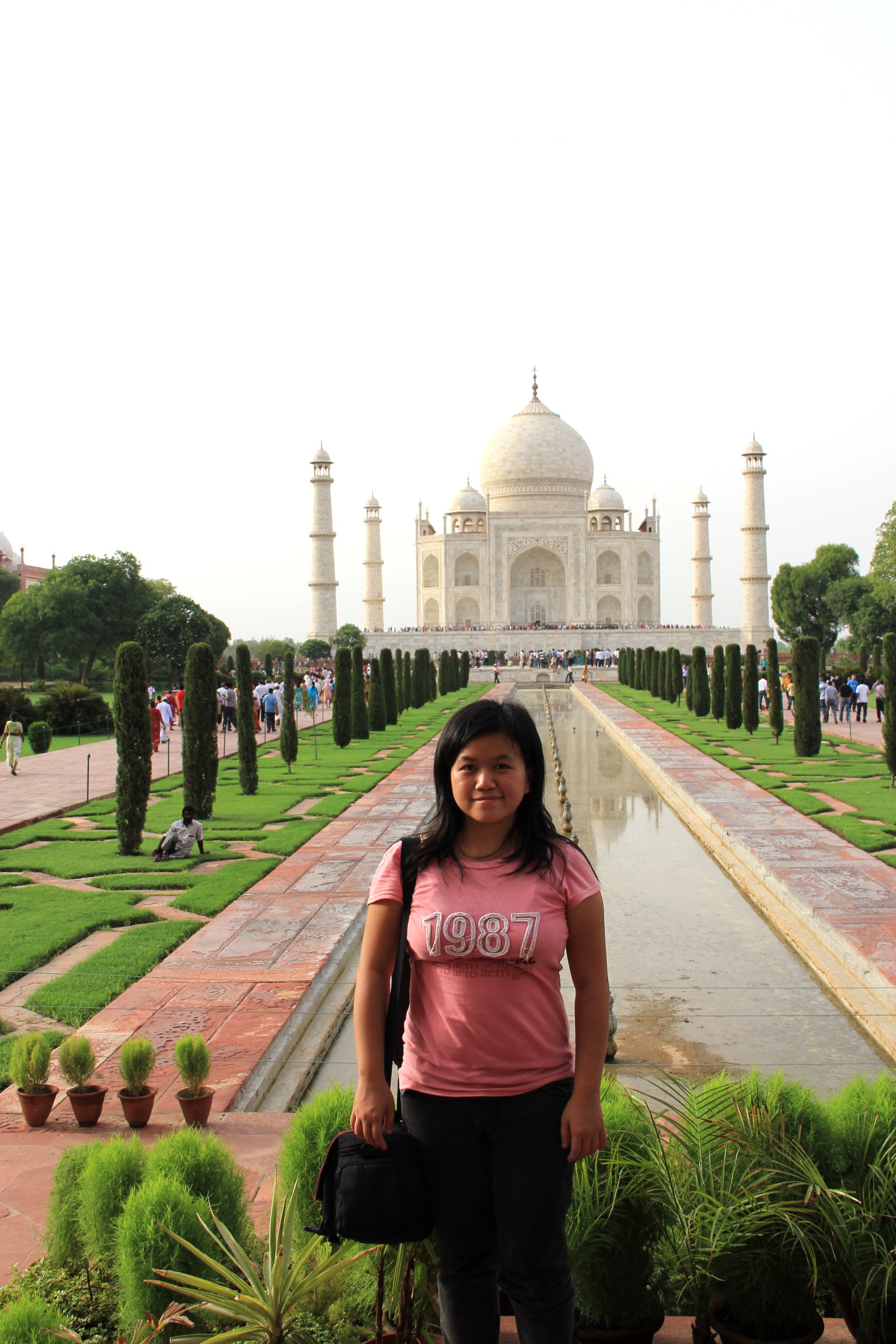 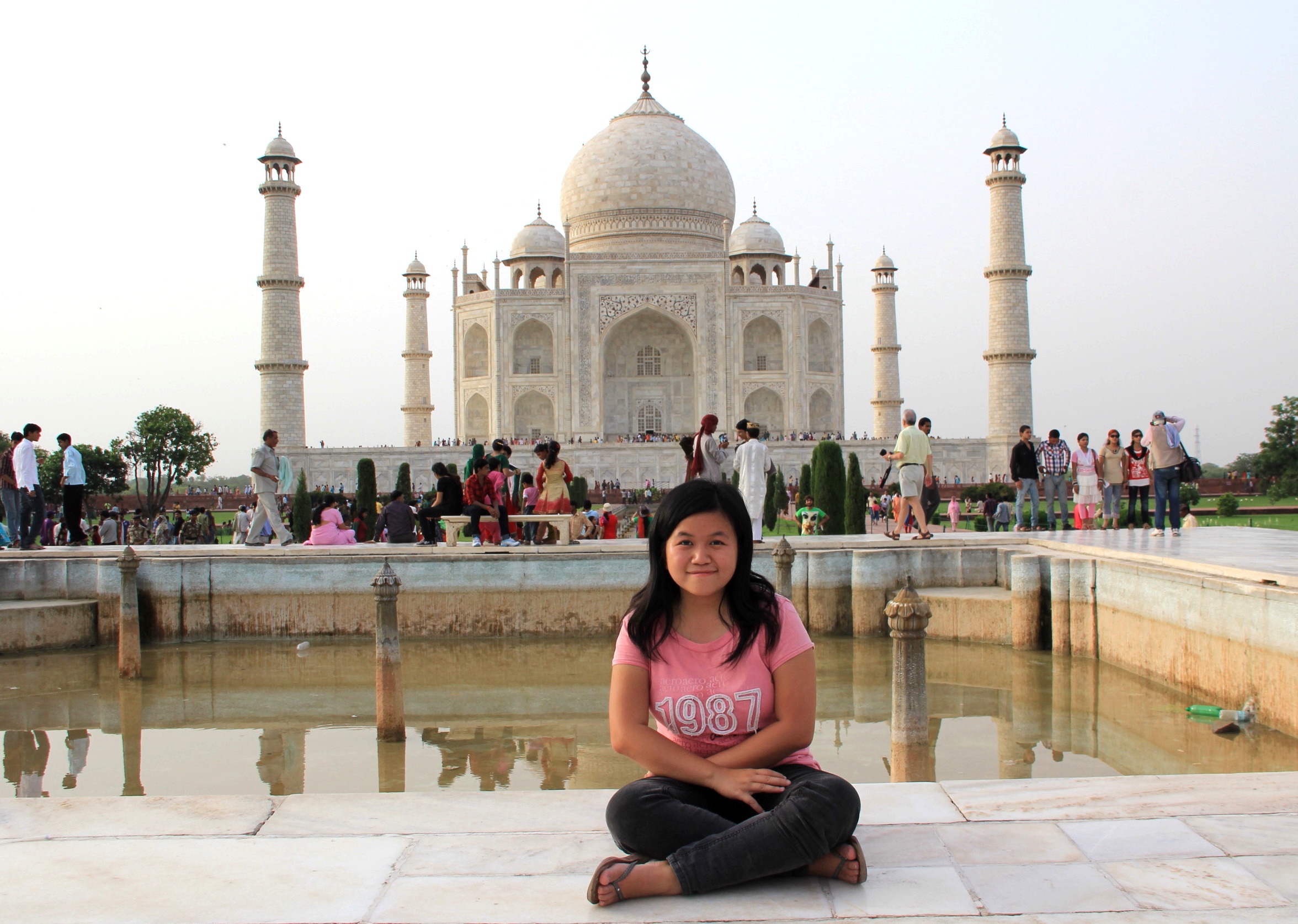 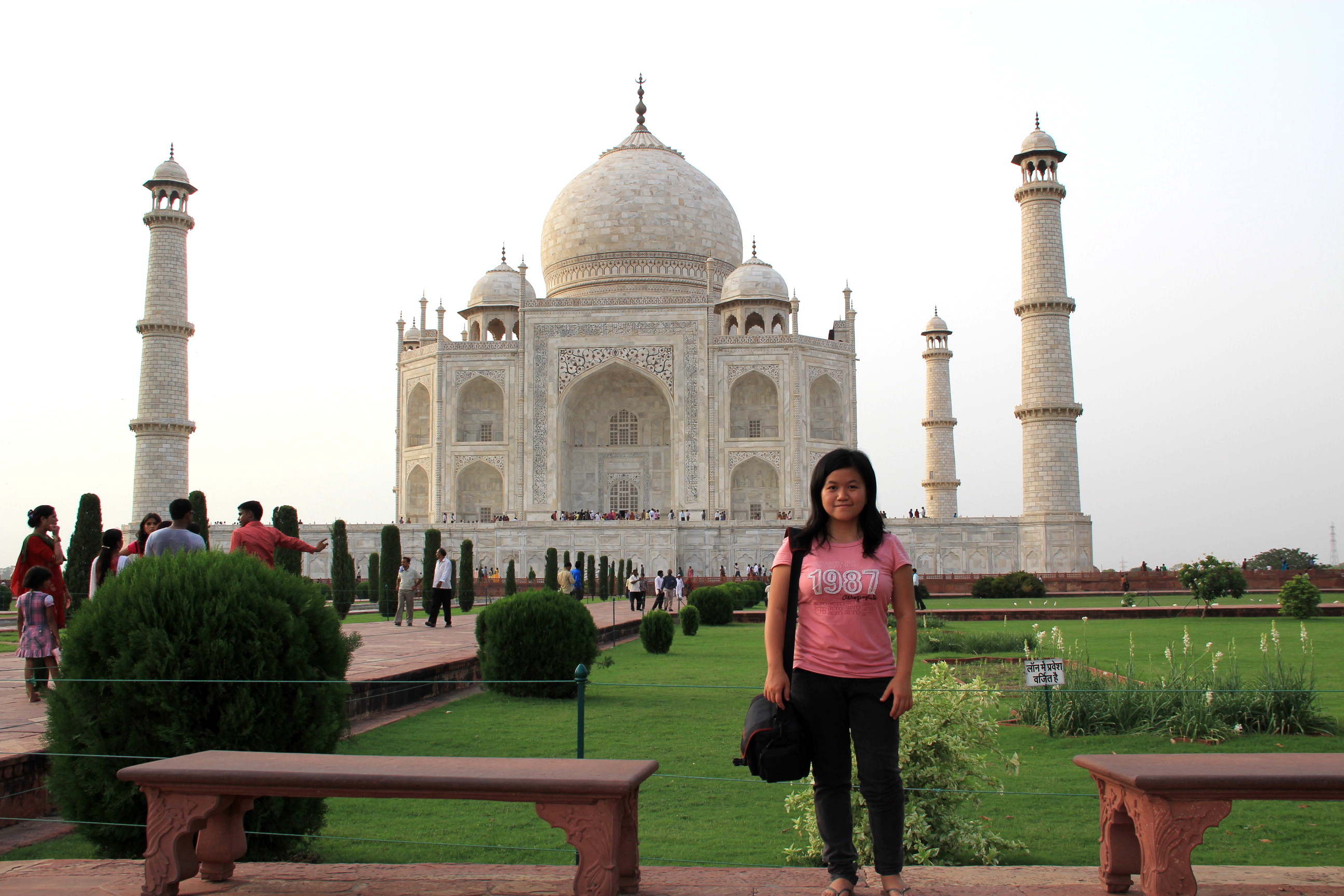 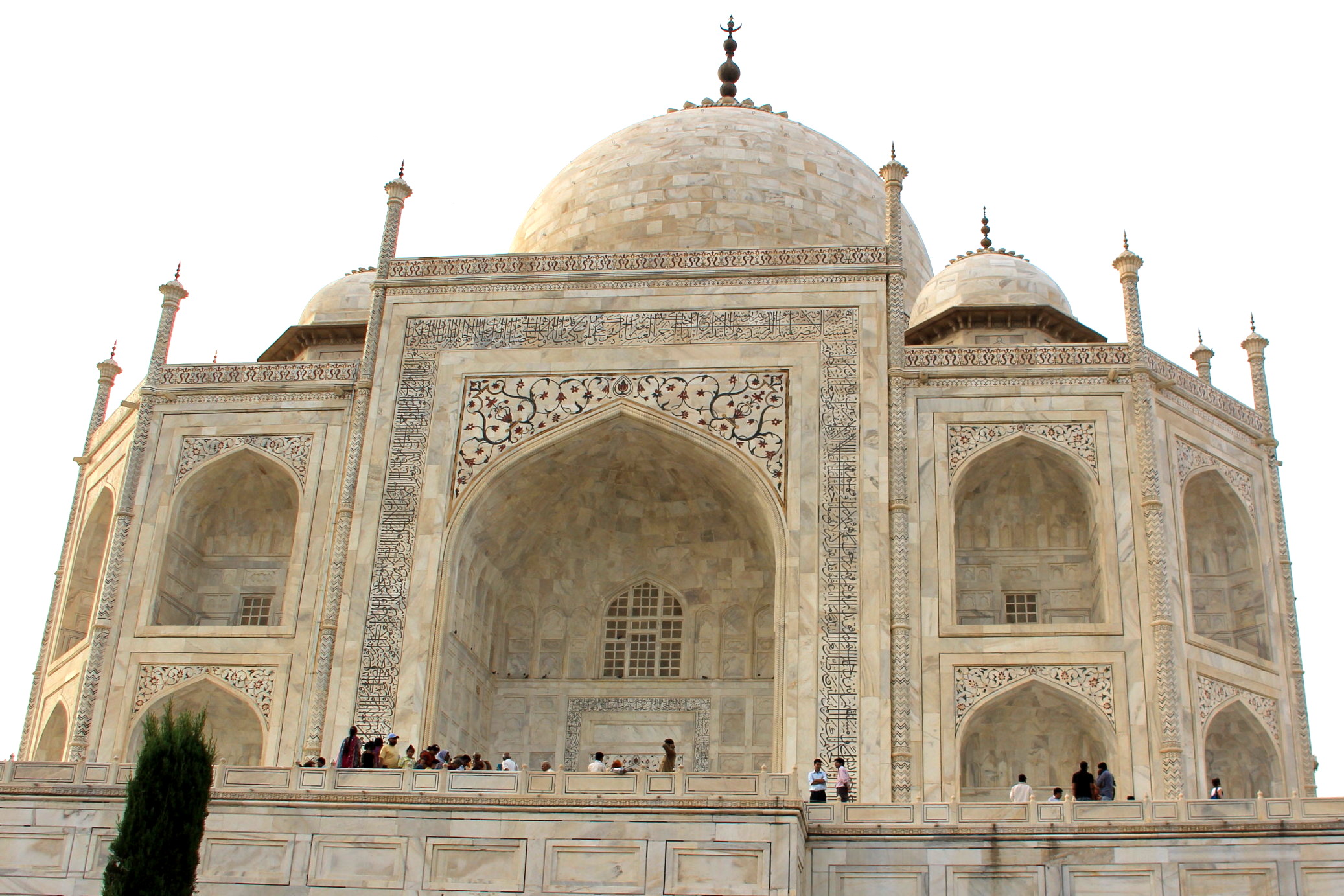 Close up view of Taj Mahal 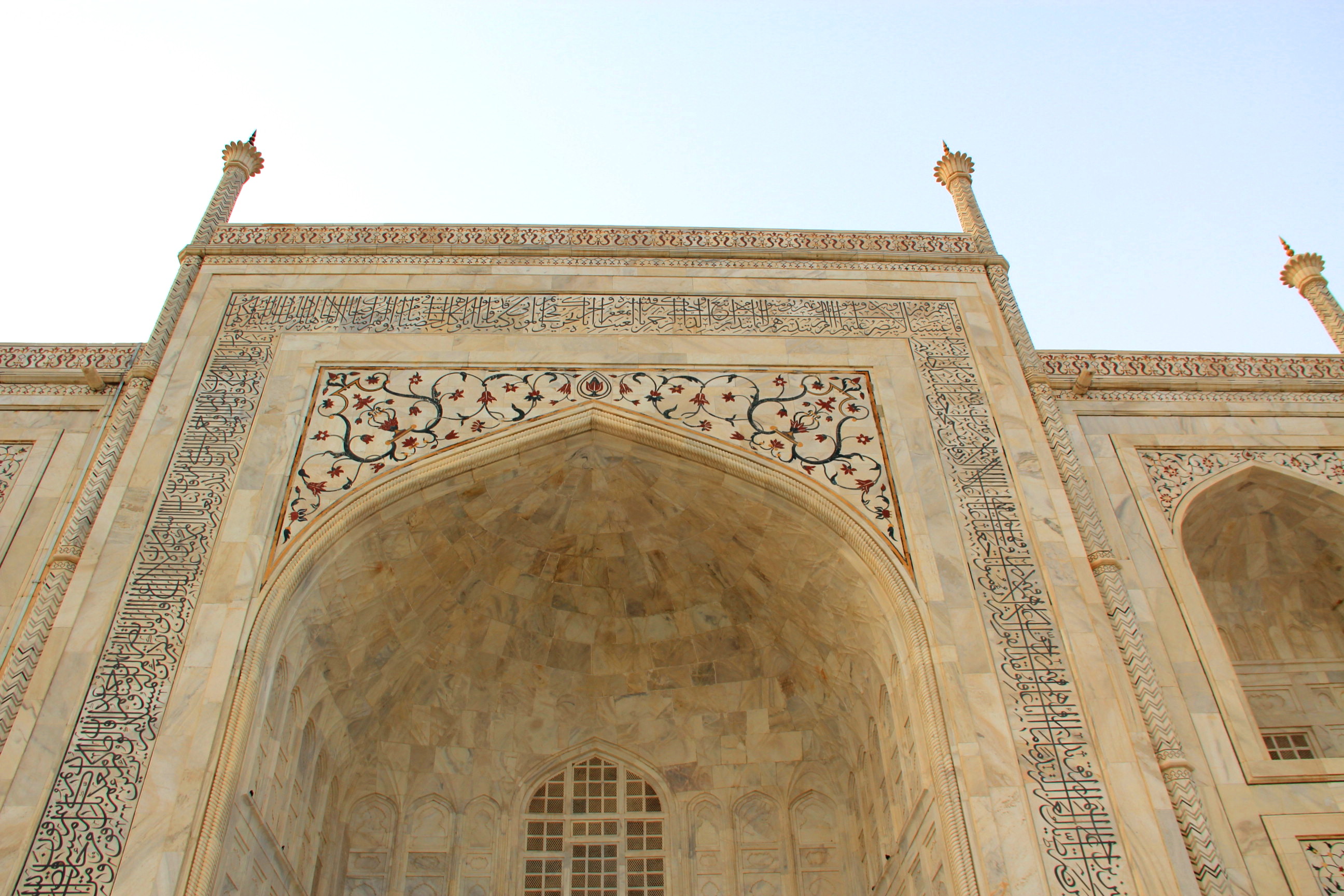 Calligraphy and floral details of marble 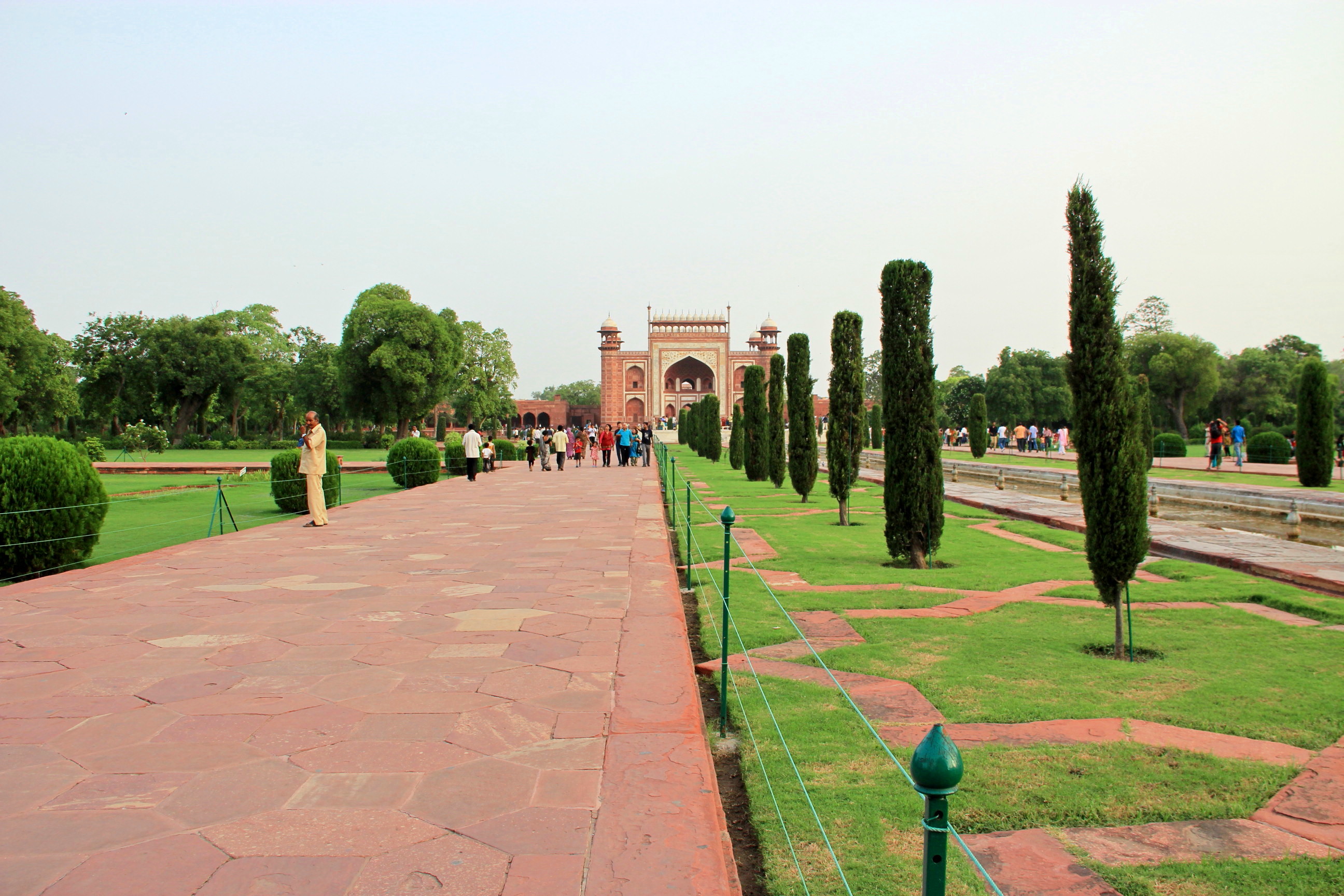 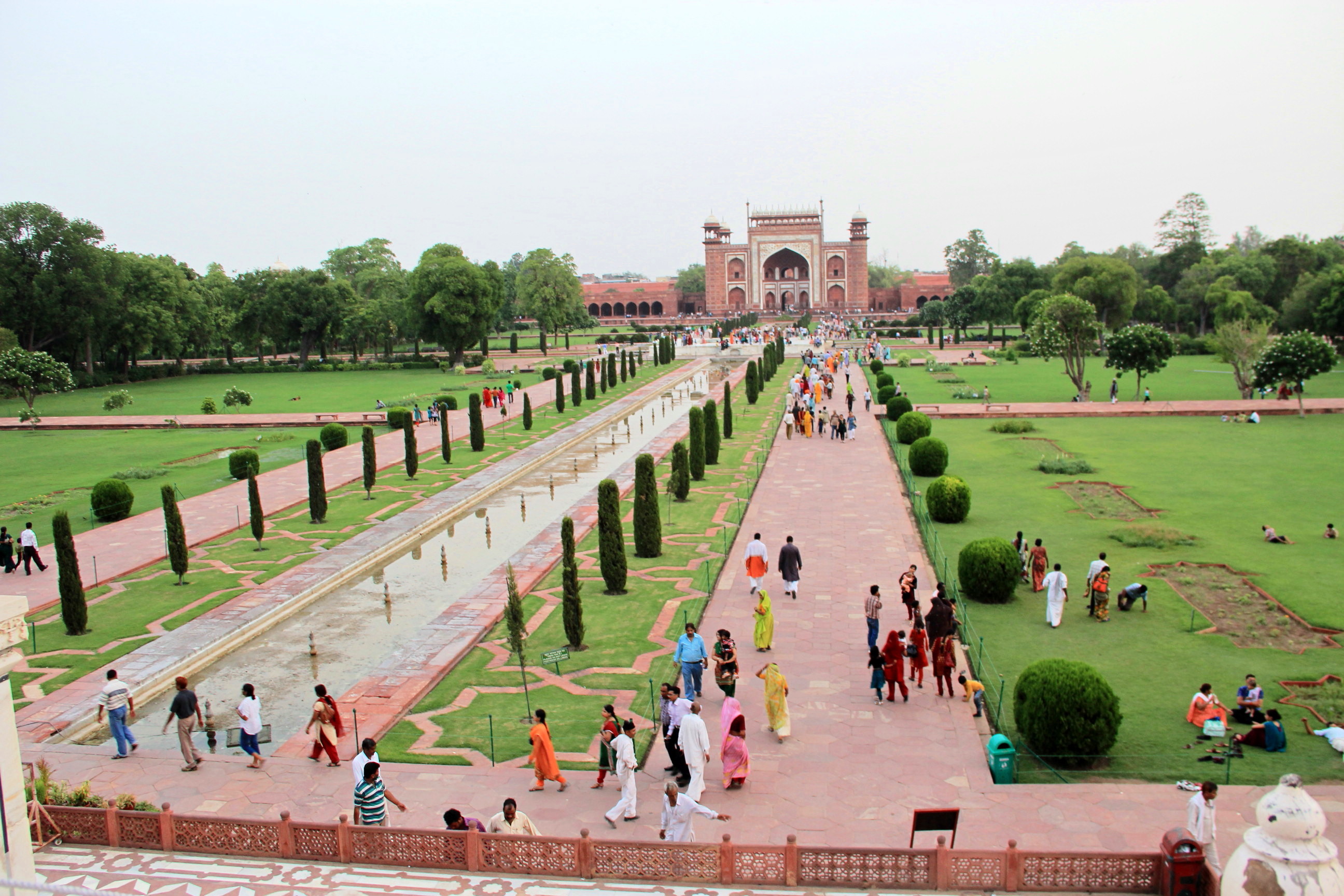 View of Garden from Taj Mahal 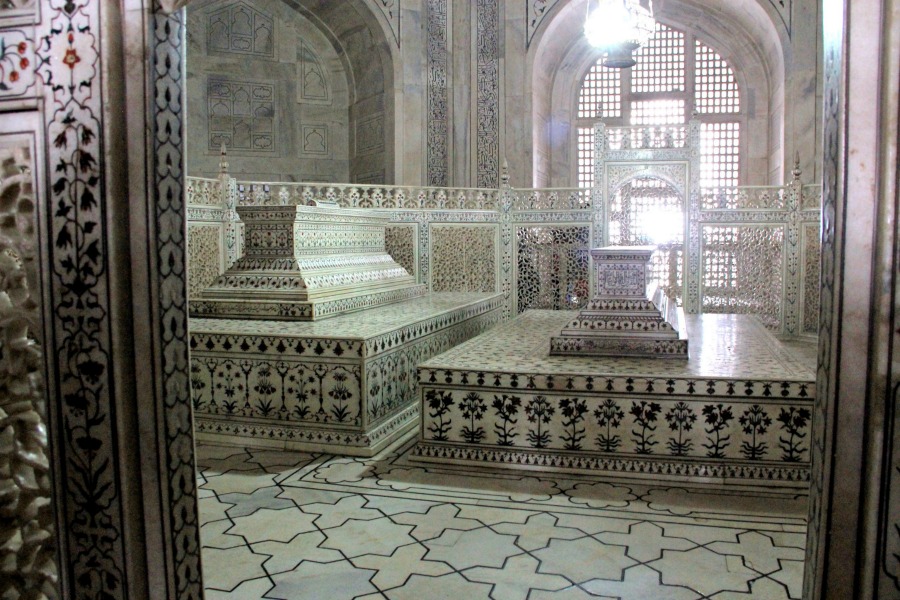 Tomb of Mumtaz Mahal and Shah Jahan inside Taj Mahal 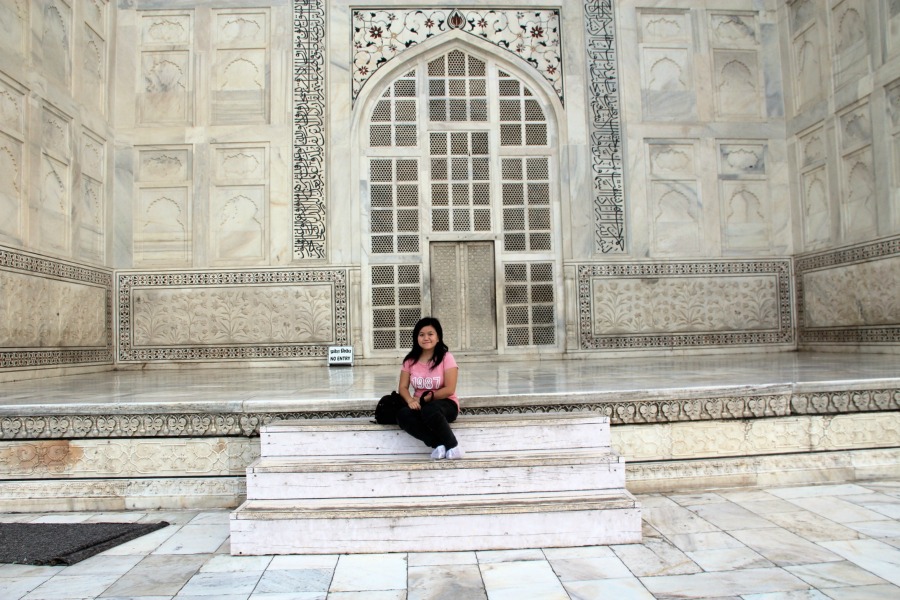 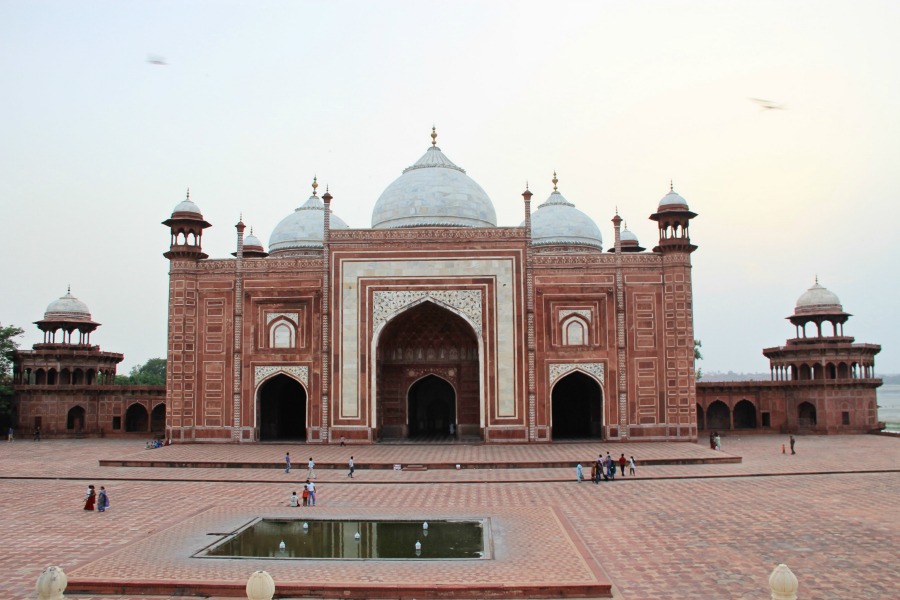 Outlying red stone building at the side of Taj Mahal

From Taj Mahal, we went to Agra train station to catch our overnight train to Varanasi. At the train station, we had anxiety attack.

We had bought 2 train tickets, but one of it was a confirmed ticket, while the other one was on waiting list. So we asked one train officer, but he said it is not confirmed, without checking the computer system. We asked another train officer, he told us to check with the train conductor when the train arrive.

We called Tenzin to help us check, he said that it is not confirmed. We were so confused and anxious. We called our travel agent guy (in McLeod Ganj) who sold us the ticket, he said he was unable to check for us because he was not in the office at the moment, he advised us to bribe the train conductor to give us seat of people who didn’t show up. It didn’t sound good.

We also asked the ticket counter whether we could buy another ticket because our ticket was not confirmed, the staff said that we could share a seat. Finally we made decision to share the sleeper bed that got the confirmed ticket. And, the train came 3 hours late! Now this is what I call “taking train in India” is all about! Both of us crammed into a single upper bed, and slept soundly not long after. What an experience!

Regarding Trains. All Trains have a Reservation Chart showing the seats allotted and Coach etc. They also have a waiting List printed and put on boards.Many Stations are converting to an electronic board. This Information is pasted on every train as well. Every Ticket has a PNR No. You can sms this number to the Railways and you will get the status immediately. You are not permitted to travel on a wait listed ticket. You took the ractical way out by sharing though the passenger with the waitlisted ought not to have boarded the train.

Thank you for your insights!

you have captured the sights beautifully through your lens. great post