We woke up very early in the morning because we wanted to catch the 2nd train from Keelung at 5.33am, so that we could catch the first HSR in Taipei. We got up at 4.40am, washed our face and packed our luggage in rush, called the receptionist to help us book cab and eventually checked out from our hotel E-Coast Star Hotel at 5.00am.

We took the cab to Keelung train station, which is probably about 5-7 mins cab drive. We rushed to the ticket machine and bought our tickets for normal train. Surprisingly, we could make it for the 1st train, at 5.15am. I was so relieved!

We arrived in Taipei station at 6.00am. We then walked to HSR station. We witnessed the opening of HSR ticket counter. People were already queuing even before ticket counter was opened!

We then bought our HSR ticket to Taichung, leaving Taipei at 6.36am. We bought reserved seat tickets. Since we have spare time, we went to toilet as well as bought breakfast from convenient store inside HSR station. We then departed from Taipei to Taichung. We had our breakfast in the train.

I guess he is a fish seller, bringing his fish to market (on local train in Taiwan)

Interior of HSR train. We took HSR from Taipei to Taichung

Upon arrival in Taichung at 07.28, we ran in madness to find Nantou bus station because we wanted to catch 7.35am bus to Puli. We followed the signange pointing to bus, and walked down to the basement and went to gate 5.

There was already a long queue for Nantou bus but we are confused what is the destination for this long line. We asked nantou bus counter, the lady told us the direct bus to Cingjing is at 8.45, we didn’t want to wait for 1 hour, so we decided to buy ticket to Puli.

After that, we queued at Puli destination but it was a long queue; a few buses came but we didn’t get to the front of the queue, until 8.10am. We took 8.10am bus and arrived at Puli around 9.10am.

At Puli station, we bought ticket to Cingjing, leaving at 9.35am. This bus is the same bus that leaves Taichung HSR at 8.45am. The bus was already full when it arrived at Puli, I was so scared that we couldn’t get on this bus and had to wait another hour.

It was very stressful situation because we thought we have made a mistake by not taking direct bus from Taichung HSR at 8.45am. Fortunately we were allowed to get on the bus, but we had to stand for whole journey. I told myself: it’s better than waiting for another hour. So I sucked it in for an hour journey to Cingjing. The view along the way was magnificent though. (see tips at the end of the post regarding taking Nantou Bus to Cingjing)

When the bus arrived at Wushe, before Cingjing, we told the bus driver to drop us at our hotel location. The driver then dropped us at the middle of nowhere around 10.30am.

We were lost and couldn’t figure out where our hotel is. We stood at the road side and tried to search in Google maps.

Fortunately a taxi driver stopped by and asked where we wanted to go, we told him our hotel name and he pointed us to a signboard. We followed the direction on the signboard and eventually arrived at our hotel, Shan Shui-Yuan Vege Guest House, around 10.40am.

Yay we made it to Cingjing before noon! So glad that we made it in the morning.

We checked in hotel but were told that the room is not ready yet until afternoon. So we settled the paperwork, stored our luggage with the hotel, and asked receptionist about how to get around and where to go.

She explained that we could call a transport company and they would pick us at any location within about 5-15 mins. and they can bring us to anywhere in Cingjing, for a fee of TWD 50/person. We thought it was great price.

And, there was a live performance going on. It was such a great lunch, with such a nice weather (cool weather) and such a nice atmosphere. I didn’t want to leave!

City Cafe in front of Little Swiss Garden where we had our bento lunch, accompanied by live performance. Such a great atmosphere.

Eventually we had to lift our lazy asses and buy tickets from Little Swiss Garden counter.

Tips: You want to get a chop on your hand, to allow you for re-entry.

The garden has well-manicured lawns and flowers. It was so neat, it was hard to find dead flowers. There is a pond in the middle that has water performance, watch out for performance timing in the brochure.

We saw the performance, it was simple, there was nothing much. I was awe-struck by the beautiful flowers. The cool weather made it nice to hang around.

I’ve been to 2 Disneylands before, and I’m definitely dreaming of a huge flower garden in a Disney-like park. Little Swiss Garden is a small garden, yet it’s such a perfectly-maintained garden. It is worth to visit this little garden.

Little Windmill in the middle of the pond

We joined the queue and paid TWD 20/person for the bus. At Green Green Grasslands, we bought ticket at entrance and go in directly to the sheep show area.

Tips: You want to get a chop on your hand, to allow you for re-entry. 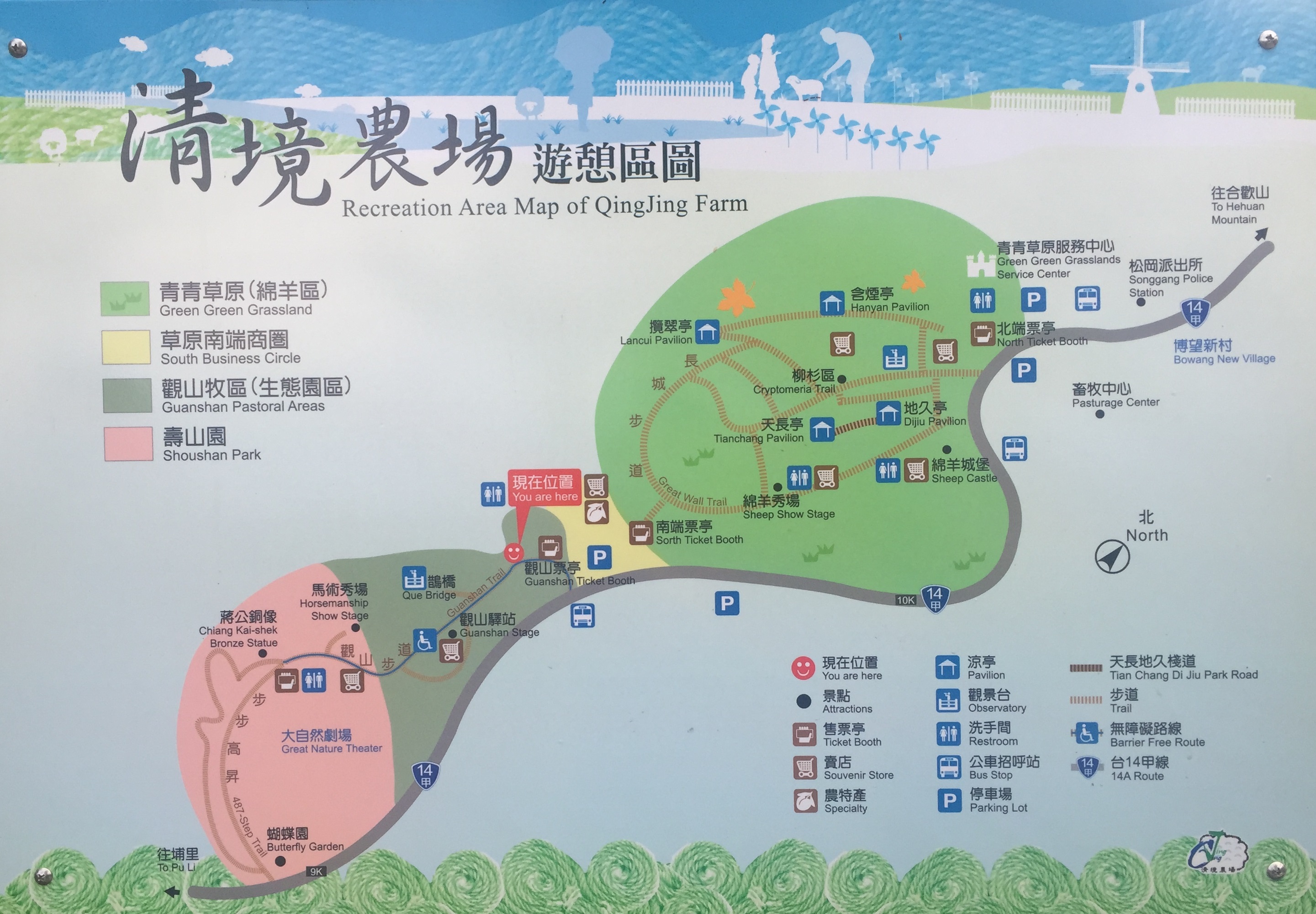 It was quite a long walk to the stage. Once at the stage, you want to scatter to find spot that is suitable for your height.

The show was started with introduction of the shepherd. Then the shepherd guided the sheep up the hill and back down to the cage near stage. He then shaved the sheep in front of the audience!

Leading the sheep to go up the hill – Sheep Show

Sheep on the hill

After that, there was some other comedy performance and then that’s it. And the end of the show, visitors got to ride the horses for a few minutes by paying certain fees to the counter.

Visitor also got to touch and feed all the sheep. It was my first time touching and feeding them, it was amazing.

Feeding the goat after Sheep Show

Feeding the sheep after Sheep show

After that, we walked to Horse Show arena to watch horse show. The show mainly presented a few horsemen and women doing acrobatic moves while riding the horse round the stage.

After the shows, we explored the farm and took photos before walking back to bus stop to ride the shuttle bus back to Little Swiss Garden.

I couldn’t find map for Taiwan local trains. The only way for me to plan for local train transportation is to go to their official websites, which are quite informative and interactive. You may visit https://tip.railway.gov.tw/tra-tip-web/tip?lang=EN_US

In my opinion, pre-booking is not necessary as there are many trains in a day.

Also, if you transit at Puli, there’s nothing much to be done, except probably visit the nearby KFC. Puli is the middle point between Taichung, Cingjing & Sun Moon Lake.

Nantou bus will stop at many stops on the way to Cingjing. Therefore, you may ask your hotel what the nearest bus stop name is, and then inform your Nantou bus driver where you want to stop or just tell him your hotel name. The driver will announce to you when the bus arrives at your destination.

The bus also stops at Little Swiss Garden and Green Green Grassland. To check the timetable and price, you may visit their website at http://www.ntbus.com.tw/en-index.html To get a sense of direction, below is map showing location of Tai Chung, Puli, Cingjing, and Sun Moon Lake. 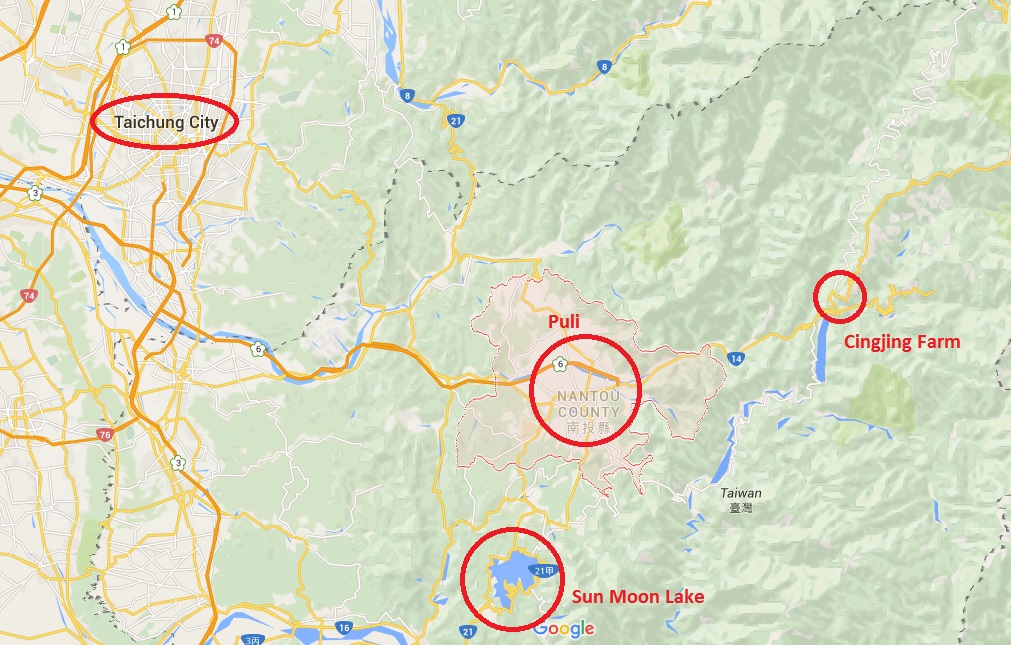 The map of Cingjing with additional translation that I added: 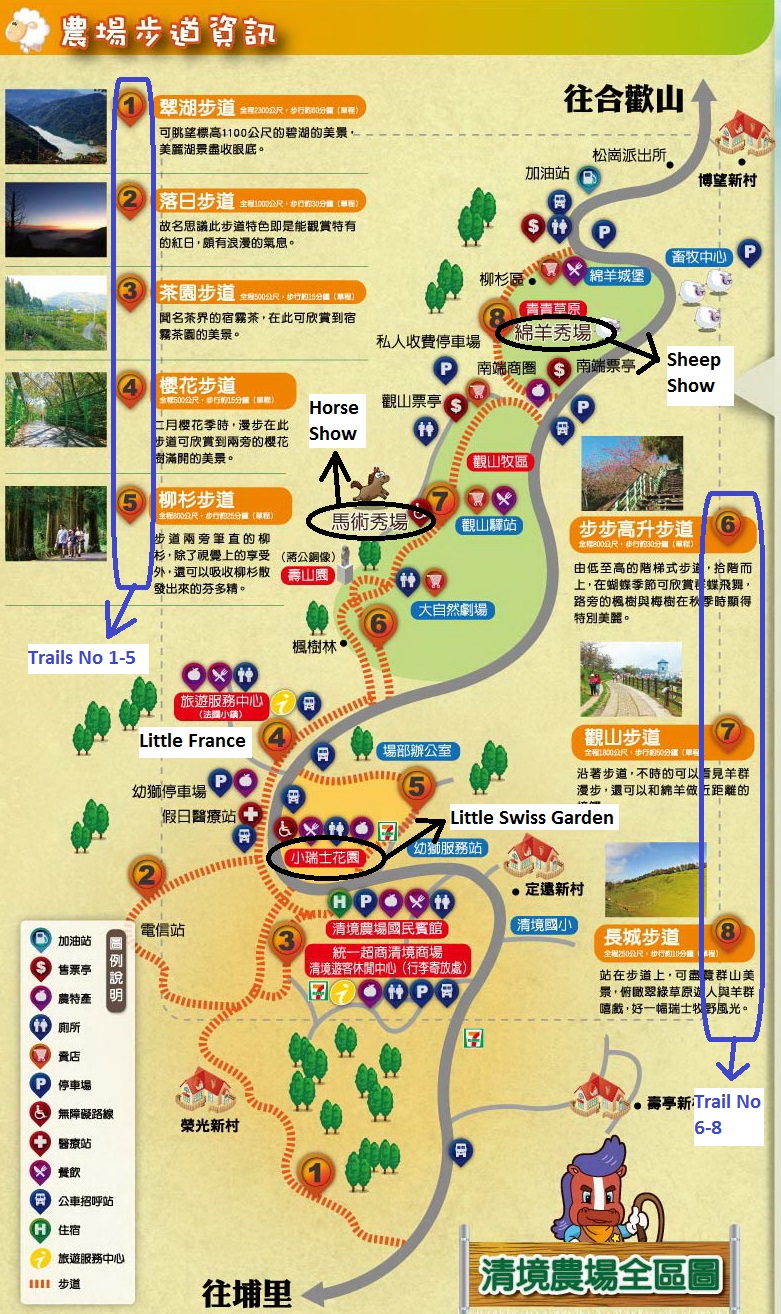 Pick up service around Cingjing

This is Part 4 of my “Taiwan Trip in 2015” series. Read other posts in this series in chronological order:

To see all articles I’ve written about Taiwan, visit my Taiwan page.

Disclosure: Some of the links in this post are affiliate links. If you make any purchase through my links, I will receive a small commission, at no extra cost to you. Thank you for your support 🙂

Sorry I'm not sure, maybe you can check with your hotel :)

Hi Jas, it was at Gate 5 at the basement. There were a couple of lines at Gate 5, so you need to ask the Nantou bus counter for the correct queue line.